On May 15, 2022, the Space Dumpling token (SDUMP) was exploited, leading to a loss of 7.6 BNB around ~$2,000 at time of incident. The attacker took advantage of Space Dumpling anti-whale mechanism and drained funds from its liquidity pools. The attacker obfuscated the profits through Tornado Cash on June 1, 2022.

On May 15, 2022 at 9 AM UTC, Space Dumpling token (SDUMP) was exploited via flash loan attack. The attacker took advantage of SpaceDumplingToken's anti-whale mechanism and drained funds from its liquidity pools. The attacker deployer an attack contract which flash loaned WBNB which was swapped for SDUMP and transferred directly to the SDUMP-WBNB pool. Similar to Hackerdao attack vector, the attacker contract calls the skim() function and since the amount of SDUMP was a large quantity, the anti-whale mechanism triggered. The total loss was approximately 7.6 BNB which was about ~$2,000 USD at the time the profits were obfuscated via Tornado Cash.

The project itself had a stronger presence in the summer of 2021 where it was active on multiple social channels including but not limited to: Twitter, Telegram, Medium, and a website. Most of these channels have been deleted or wiped excluding their Medium page. Their GitHub and Whitepaper were also deleted. From what we can gather, the project experienced a slow death due to lack of traction. At the time of writing this article, Space Dumpling (SDUMP) has not seen strong activity on-chain since early prior to this incident in early May 2021.

Take the exploit to SDUMP-WBNB pool as an example:

The Space Dumpling contract's anti-whale mechanism is the primary vulnerability. The anti-whale fee is not deducted from the transferred amount. 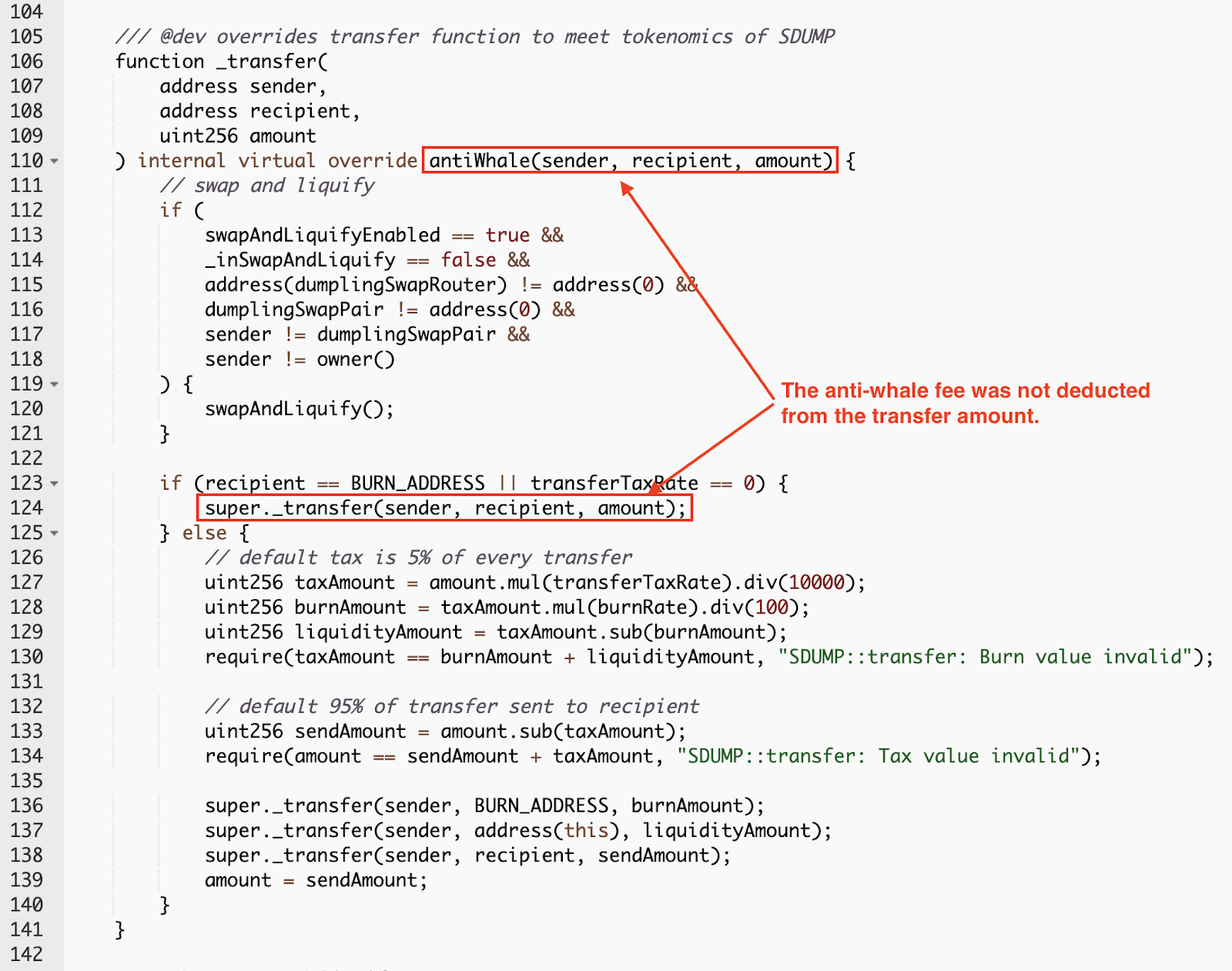 This mechanism could be used to drain funds from the UniswapV2Pair contract by the transfer-skim process.

The Space Dumpling flash loan attack represents just one of many attacks abusing the same vulnerability, many confirmed to have the same attacker and others such as Hackerdao where the attack pattern lines up perfectly. Small projects such as Space Dumpling trying to keep their feet on the ground are at constant odds with malicious actors. With contract auditing these potential vulnerabilities and pitfalls can be dissolved before crushing project momentum. In the case of Space Dumpling, the Dumpling Swap project appears to have been abandoned with all social channels down or wiped and the only paper trail left being the Medium page which was left untouched since May 18, 2021. It is tough to call where the project would have landed in the event that it was never exploited however it is evident that the exploit did factor in its growth halting days afterward.