Products
Resources
Company
Back to all stories
Blogs
What is Metaverse?

The Metaverse: Your New Virtual Home

Picture a person standing in their living room, a VR headset strapped to their face. The room is dark, but inside the headset a thousand interlinked worlds are glowing. The player could be meeting up with a friend, shopping for new clothes, or slaying dragons. They could even be at work. In that sense, they’re not just a player: they’re a consumer, an identity, and an employee. They’re in the Metaverse.

The Metaverse is many things to many people. But at its simplest, it’s a virtual space where the physical world and the internet intersect. The Metaverse offers an immersive experience in these virtual worlds. These worlds could be user-built (like in Minecraft) or built by a company or organization (like video games or corporate websites). They will have different purposes. You’ll go to work in one world and then hang out with your friends in a different one. There will be virtual golf courses, shops, concerts, gyms, parks, offices, police stations, you name it. It’s this deep integration of the real world that differentiates the Metaverse from the internet. Note: Metaverse is often capitalized, at least for the moment. Perhaps as it becomes as ingrained in our daily lives as the internet – if not more – Metaverse will follow the internet’s example and lose the capital letter.

Before we dive too deep into the future, a little bit of history. The term Metaverse was first coined in Neil Stephenson’s 1992 novel Snow Crash. In the book, the Metaverse exists along a single road that runs the entire circumference of a virtual planet. A corporation named the Global Multimedia Protocol Group owns all of the virtual real estate. Users can escape to and explore the Metaverse using a personal VR headset, or, for those who can’t afford their own, via a grainy, black-and-white public terminal. Users are judged by the sophistication of their avatar and getting a good one requires either money or technical expertise. Already, we’re encountering two key considerations presented by the Metaverse: ownership and access. More on that later.

Second Life is another platform closely connected with the idea of a Metaverse. It’s a platform that allows anyone to sign up, create an avatar, and take part in a virtual life. Second Lifers create and trade goods, build houses, perform jobs, have parties, and much more. The platform gained mainstream attention in 2006 when it emerged that a player had become a real-world millionaire off just a $9.95 initial investment. The player – going by the name Anshe Chung in the game – amassed her fortune mostly by trading virtual real estate.

While Second Life’s userbase peaked more than a decade ago, it has had an undeniable influence on what we picture when we think about virtual worlds. So how does it compare to the Metaverse that’s been gaining attention recently? First of all, you play Second Life on a 2D screen. The Metaverse is designed to be immersive, with VR headsets and motion controllers guiding your avatar in the virtual world. And it’s inextricably connected to the real world. You’ll stroll the corridors of the Louvre rather than looking at a pixelated representation on a screen; you’ll try on a new jacket at a virtual clothes store rather than reading the sizing guide on the store’s website. There’ll also be completely new art galleries that take advantage of the Metaverse’s expanded capabilities in novel ways, and clothes stores that do not sell any physical garments at all but rather the latest fashions for your virtual avatar. 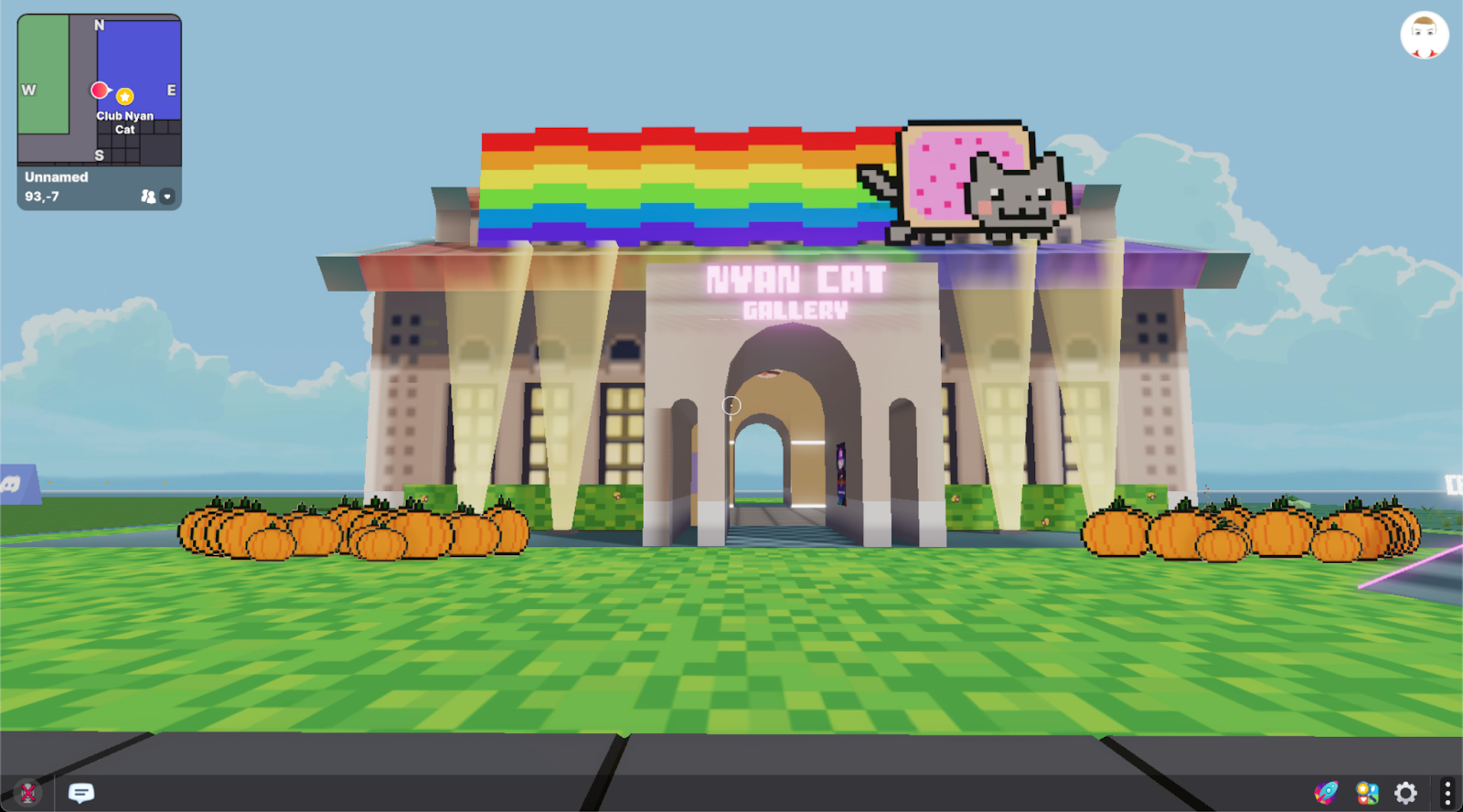 The Nyan Cat Gallery in Decentraland

The Metaverse offers anyone with an internet connection the chance to explore, create, and earn real money. The blockchain-based game Axie Infinity saw huge growth during the pandemic, particularly in the Philippines. Many people supplemented or even replaced their real-world income with the money they made breeding, battling, and trading axies – Pokémon-like creatures that are each represented by a unique NFT. One player even bought two houses with his earnings, demonstrating the power of the Metaverse to meaningfully affect the lives of people who may otherwise be lacking real-world opportunities.

The Metaverse is an expansion and improvement in many ways on Web 2.0, the era of the internet’s development that saw the rise of platforms such as Facebook, YouTube, Dropbox, Skype, and Shopify. These platforms brought us social networking, cheap and easy communication, cloud storage and services, e-commerce, and more.

Here is where the Metaverse builds on Web 2.0 by incorporating technologies associated with Web3. Users can be rewarded for their engagement with the platform in the form of tokens that are easily convertible to other crypto or fiat currencies. Or they can create, earn, or buy in-game items that are represented as NFTs and can be taken with the player to other worlds.

Games can be provably fair, thanks to cryptographically-verifiable randomness. Blockchain technology is woven into the fabric of the open-source Metaverse, giving users assurances that they could never get from Web 2.0 companies.

However, at least one of those companies – Facebook – is aggressively pursuing its own Metaverse projects. The company outlined its vision for the Metaverse while announcing a $50 million investment into global research and program partners to ensure the virtual world is “developed responsibly”.

“It’s not necessarily about spending more time online — it’s about making the time you do spend online more meaningful.”

The launch of Facebook’s virtual work space presented one vision of the Metaverse: as a clean, corporate space for business to be conducted. It makes a lot of sense that Facebook would aim to enhance its existing services in this way. Social interactions would be much more engaging in virtual reality than via Facebook Messenger, and Facebook Marketplace could become the grand bazaar of the Metaverse. But since it’s an extension of Web 2.0 thinking – it doesn’t use any of the decentralized technologies that have come into existence since the social network’s launch – Facebook’s vision doesn’t capture the full potential of a blockchain-powered, decentralized Metaverse.

For that, we need to turn to worlds such as Decentraland. It’s easy to imagine a near future where, after clocking out of your 9-5 remote job’s virtual coworking space, you don’t even remove your Oculus Quest (or Apple VR headset, rumored to have two 8K screens) before heading to the awesome house you’ve built in one of the many universes that together make up the Metaverse. Maybe you invite some friends over, maybe you take a date out on the town, maybe you stay home and tend to your garden. The Metaverse will contain numerous spaces for work, play, and everything in between.

And blockchain makes the Metaverse fairer and freer. Inhabitants are incentivized to create better worlds because they own their creations and are rewarded accordingly. When its potential is fully realized, the Metaverse might be the immersive virtual world where we experience Web3, just as we experienced Web 2.0 on laptops and smartphone screens.

Right now, the Metaverse is still more of an idea than a (virtual) reality. There are a handful of worlds being constructed, the full benefits of blockchain technology have not yet been implemented, and most people are still reading articles like this rather than strapping on their VR headsets and jumping into virtual worlds. And there aren’t many worlds that offer a fully immersive experience just yet. OASIS, the virtual world in Ready Player One (2018), goes online in 2025, so we might have a couple of years left to wait until we’re all working, shopping, and playing in the Metaverse. But make no mistake, it’s being built right now.

It’s being built by companies like Facebook, who at the end of the day have an obligation to their shareholders to maximize the amount of profit they can extract. But it’s also being built by enthusiasts working on their own time to create virtual spaces they want to inhabit. In that way, it’s like the early days of the internet when it was being created through an organic process of enthusiastic, often-amateur experimentation.

Will we end up with a Metaverse where corporations compete to sell up to 80% of our field of vision to advertisers, like Ready Player One’s antagonist Innovative Online Industries? Or will we be inhabiting user-generated environments that push the boundaries of human creativity, knowledge, and virtual experience?

If the history of the internet is any guide, the answer is we’ll probably end up somewhere in between. But that’s no reason to give up on trying to ensure that what matters to you exists in the Metaverse. The way things are going, it’s looking like we’re all going to be spending a lot of time there.