CertiK has recently completed a security audit for IoTeX, a leading project with the aim of building a privacy-centric blockchain platform for the Internet of Things (IoT) with strong scalability and privacy for incubating new IoT applications and ecosystems.

After CertiK successfully completed IoTeX’s token audit in 2018, this verification primarily focused on the implementation of the IoTeX Delegates Program, which defines how the network will reach consensus, incentivize network participation, and evolve sustainably over time.

In a nutshell, the smart contracts handle the implementations end-to-end, from registering candidates to the staking and voting mechanisms. It prototyped the ERC900 proposal and made significant upgrades for better quality and feasibility of the intentions.

Given the highly customized nature and important use case of the smart contract, CertiK assigned a group of 4 experts to review the fundamental design, hold discussions with the IoTeX team to strengthen the understanding of product philosophy under the hood, perform automated scans, and conduct Formal Verification over the source code to ensure the product works as intended under all possible scenarios without any tricky corner cases. 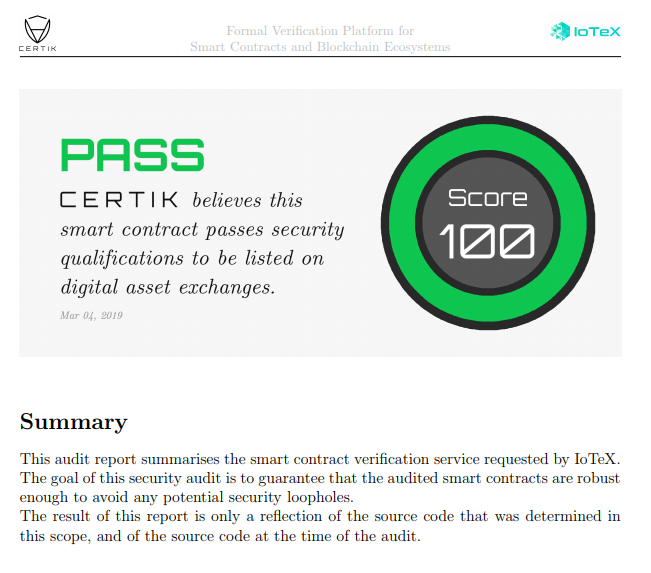 CertiK leverages the latest and most advanced Formal Verification technology to deliver the most comprehensive and rigorous security audits in the blockchain space. Rather than merely checking for bugs and vulnerabilities, Formal Verification leverages rigorous mathematical theorems to check whether the source code of a program meets its specification, computing all possible scenarios and providing proof that it is impossible for the checked vulnerabilities to exist.

IoTeX leveraged CertiK’s audit reports and technical insights to enhance the overall design and security of their systems. The full audit report provided by CertiK can be accessed here.

Founded as an open-source project in 2017, IoTeX’s mission is to build a decentralized trust fabric for a new era of collaboration and data exchange among devices, applications, and people. Backed by a global team of research scientists and top engineers, IoTeX combines blockchain, trusted hardware and edge computing to realize the full potential of IoT.

IoTeX is introducing token economy into IoT spaces, believing that crypto incentives, as well as community effort, are the two key forces to propel innovations in IoT space. At a high level, IoTeX’s competitive advantage stems from four main innovations:

Real-time consensus with instant finality, which improves the throughput of the network, reduces transactional costs, and enables efficient cross-chain communication; and

The primary problems with IoT security stem from a lack of ability to identify when a device is compromised, sensitive data leakage, and hackers controlling devices remotely. Designed and optimized for IoT, IoTeX uses state-of-the-art privacy, consensus, and sub-chain innovations to capture the full potential of IoT. By enabling trusted data, interoperability, and M2M automation, IoTeX bridges the physical and digital worlds and brings trusted machine economies to the masses, tackling the problems facing IoT security today.