CertiK has recently conducted a security audit of Top Network token (TOP), which was then successfully launched on Huobi Pro via the Prime program (as the first project).

On March 26, 2019, Top Network completed a successful listing via Huobi Prime to the platform of the veteran cryptocurrency exchange Huobi Global. The fundraising event went through three rounds in total with each round concluding in less than a few seconds. CertiK, as Top Network’s security partner and the official auditor of $TOP token, is delighted to congratulate the Top Network team for passing our rigorous Formal Verification process with a remarkable score.

The Top Network token contract is based on standard ERC-20 with lean implementations and enough precondition checks to prevent those corner cases. Other than the common interfaces, the $TOP token has a few extra switches or functions that belong to the token issuer/owner:

Given this was Top Network’s first debut on a digital exchange, CertiK assigned a group of 3 security experts to run audits independently utilizing CertiK’s proprietary Formal Verification procedure and then combine results for further confirmation. 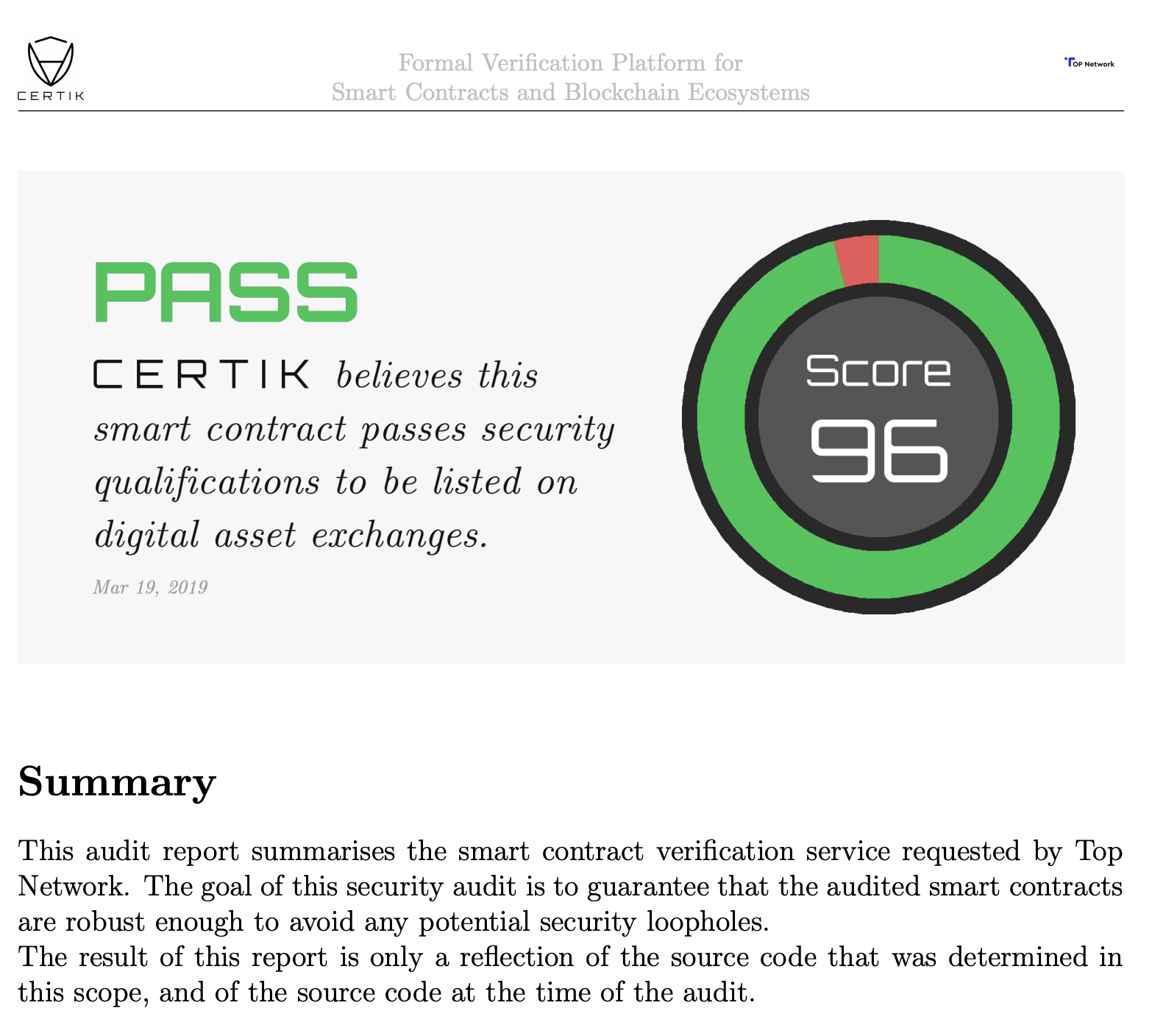 CertiK leverages the latest and most advanced Formal Verification technology to deliver the most comprehensive and rigorous security audits in the blockchain space. Rather than merely checking for bugs and vulnerabilities, Formal Verification leverages rigorous mathematical theorems to check whether the source code of a program meets its specification, computing all possible scenarios and providing proof that it is impossible for the checked vulnerabilities to exist.

Top Network leveraged CertiK’s audit reports and technical insights to enhance the overall design and security of their systems. The full audit report provided by CertiK can be accessed here.

Top Network is a high performance blockchain with a powerful array of service-level infrastructures, including the world’s first decentralized cloud communication services. TOP aims to build a business-friendly blockchain platform that handles real-world business of any type, size or volume on the blockchain.

Top Network is equipped with a Multi-Chain Platform, which meets the complexity of real-world business where financial settlement and business logic are always segregated. Top Network books and settles high volume of transactions with its high-performance blockchain and unique three-layer distributed ledgers, which enables seamless combination of mainchain, service chains and off-chain ledger to store, process, book and settle any size and volume of real-world business.