Proxy patterns enable smart contracts to upgrade their logic while maintaining their on-chain address and state values. Calls made to proxy contracts execute logic from an implementation contract to modify the proxy’s state. This article gives an overview of the types of proxy contracts, associated security incidents and recommendations, as well as best practices when implementing a proxy contract.

Section 1. A Brief Introduction to Upgradeable Contracts and Proxy Pattern

Smart contract code can't be modified after deploying on the blockchain. This is the whole point of immutable on-chain agreements. When developers want to update the contract code for logic upgrades, bug fixes, or security updates, they have to deploy a new contract, which results in a new contract address being generated. Proxy pattern achieves upgradeability while maintaining the same address as the most adopted solution. 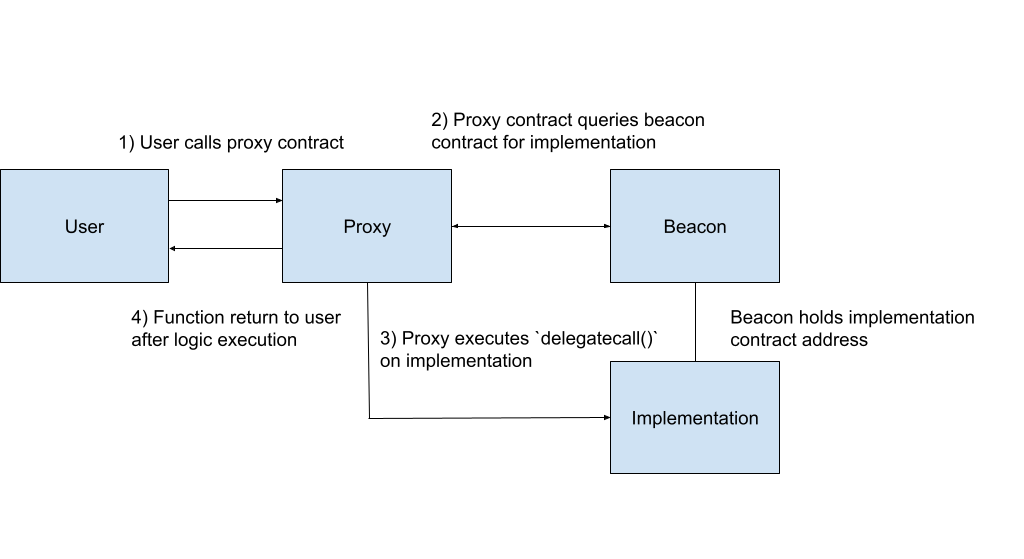 Developers can take advantage of the proxy pattern contract to implement an upgradeable contract system. However, proxy patterns are not the easiest library to use and can bring devastating security issues to the project if used incorrectly. The following section showcases incidents related to proxy misuses, and the centralization risk that proxy brings.

The proxy admin controls the upgrade mechanism to transparent upgradeable proxies, should the admin’s private key become compromised an attacker could upgrade the logic contract to execute their own malicious logic on the proxy state.

PAID Network was exploited by an attacker who compromised the private key of the proxy admin and triggered the upgrade mechanism to change the logic contract. The upgrades allowed the attacker to burn user PAID tokens and mint PAID tokens to themselves which were subsequently sold. The code itself was not vulnerable but rather the attacker was able to gain access to the private key for the privileged admin.

delegatecall() or call to an Untrusted Contract

Suppose delegatecall() is present within a logic contract, and the contract doesn't correctly verify the call target. In that case, an attacker could utilize the function to perform a call to his malicious contract to destroy the logic implementation or execute custom logic. Similarly, an unrestricted address.call() function in the logic contract with a maliciously supplied address and data field would allow the attacker to act as the proxy contract.

Integrate Proxy Pattern Only When Necessary

Not every contract needs to be upgradeable. There are numerous risks involved in using the proxy pattern, as shown in the previous section. The "upgradeable" property also raises trust issues because the proxy admin can upgrade the contract without consensus from the community. It's recommended to integrate the proxy pattern into your project only when necessary. You definitely don't want everyone to be able to kill your contract.

Do Not Modify the Proxy Library

Proxy contract libraries are complex, especially the parts that handle the storage management and the upgrade mechanism. Any mistake made in the modification can affect the working of the proxy and logic contract. Plenty of high severity proxy-related bugs we found during audits are caused by incorrectly modified proxy libraries. The Audius incident is a perfect example to show the consequence of a poorly modified proxy.

An upgradeable contract system often requires a "Proxy Admin" privilege role to manage the contract upgrade. An attacker can freely upgrade the contract to a malicious one and steal the users' assets if he compromises the admin key. We recommend carefully managing the proxy admin account's private key to avoid any potential risks of being hacked. A multi-sig wallet can be used to prevent the single point of key management failure.

Use a Separate Account for the Transparent Proxy Admin

Be Cautious when Declaring State Variables in Proxy Contracts

Each version of a logic contract must maintain the same order and type of state variables, and new state variables need to be added to the end of the existing variables. Otherwise, the delegate call would result in the proxy contract reading and/or overriding the incorrect storage values; and the old data may be associated with a newly declared variable, which can cause serious issues to the application. 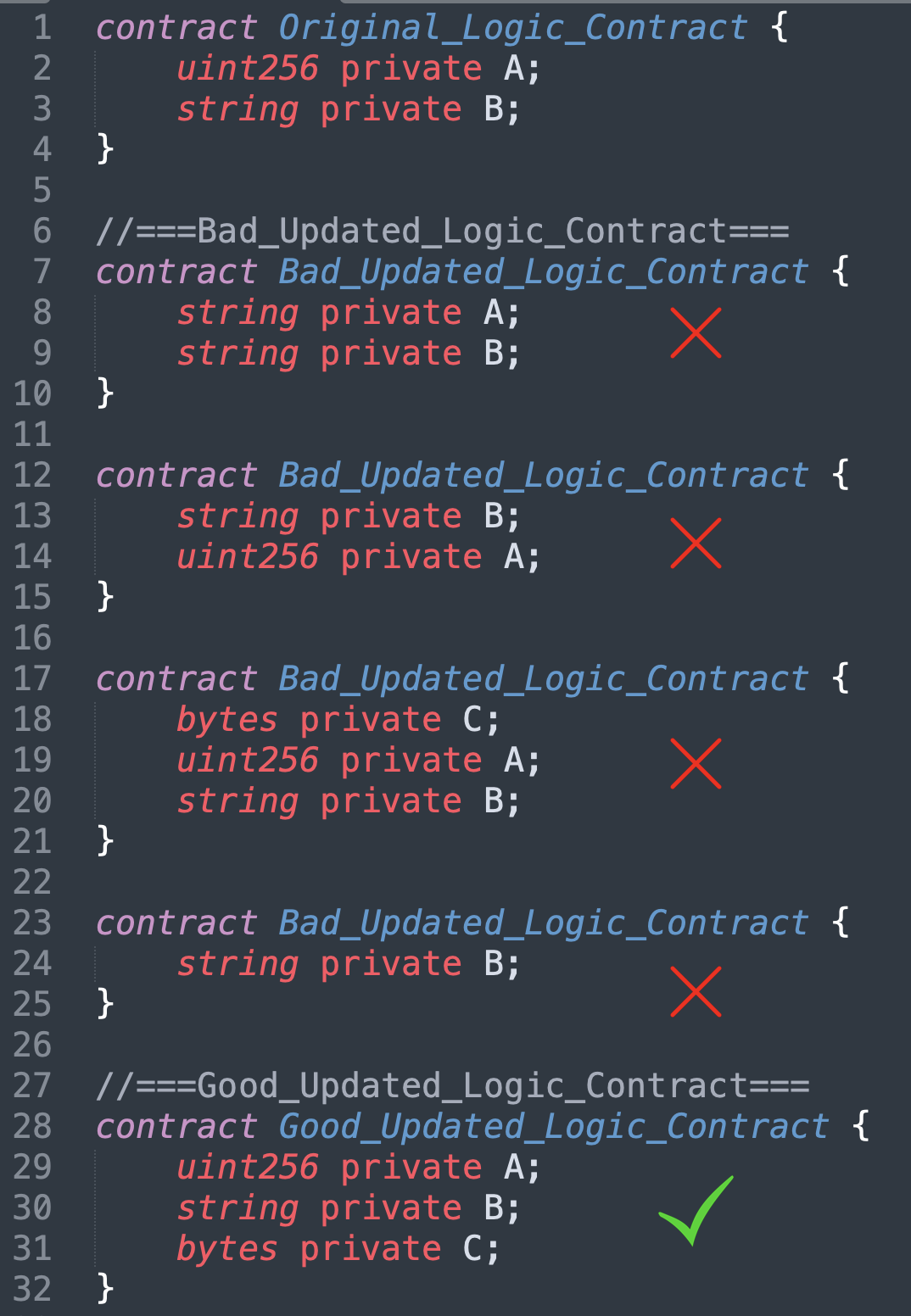 Include Storage Gap in Base Contracts

No State Variable Assignment During Construction or Declaration

Assigning state variables during declaration or in the constructor will only affect the value in the logic contract, not the proxy contract. Non-immutable parameters should be assigned using the initialize() function.

Do Not Instantiate New Contracts in the Logic Contract

Contracts instantiated through Solidity creation will not be upgradeable. Contracts should be deployed separately and have their addresses passed as a parameter into an upgradeable logic contract to be upgradeable.

If selfdestruct() or delegatecall() are present within a contract, an attacker could potentially utilize these functions to destroy the logic implementation or execute custom logic. Verify the user input and do not allow the contract to perform delegatecall/calls to untrust contracts. Furthermore, using delegatecall() in the logic contract is not recommended, as managing the storage layout in multiple contracts can be troublesome.

The overall best practice is to use provided and tested solutions, as Transparent, UUPS, and Beacon proxy patterns each have proven upgrade mechanisms with respective use cases. Otherwise, the privileged role to upgrade the proxy should also be securely managed to prevent an attacker from changing the proxy logic.

Logical implementations should also be careful to not implement functions that would result in a delegatecall() chain that could potentially execute attacker logic, such as selfdestruct(). While following best practices ensures that proxy contracts are robust deployments while maintaining the upgradeable flexibility, all code is prone to new security or logical issues that may compromise a project. It is best that all code is properly reviewed by an expert auditor, such as CertiK, that has experience auditing and securing proxy contract protocols.

Blogs
Move Capture the Flag Competition Recap
Move is a programming language specifically designed for building secure smart contracts that can be formally verified. Recently, Sui hosted a Capture the Flag competition on its developer testnet. In this article, we run through each of the challenges and their solutions. The Contest includes four challenges. In the followings, we will introduce them one by one: Challenge 1 - CheckIn Challenge 2 - SimpleGame Challenge 3 - FlashLoan Challenge 4 - MoveLock

Blogs
Case Studies
Formal Verification, the Move Language, and the Move Prover
In this post, we take a deep dive into the formal verification of Move programs.