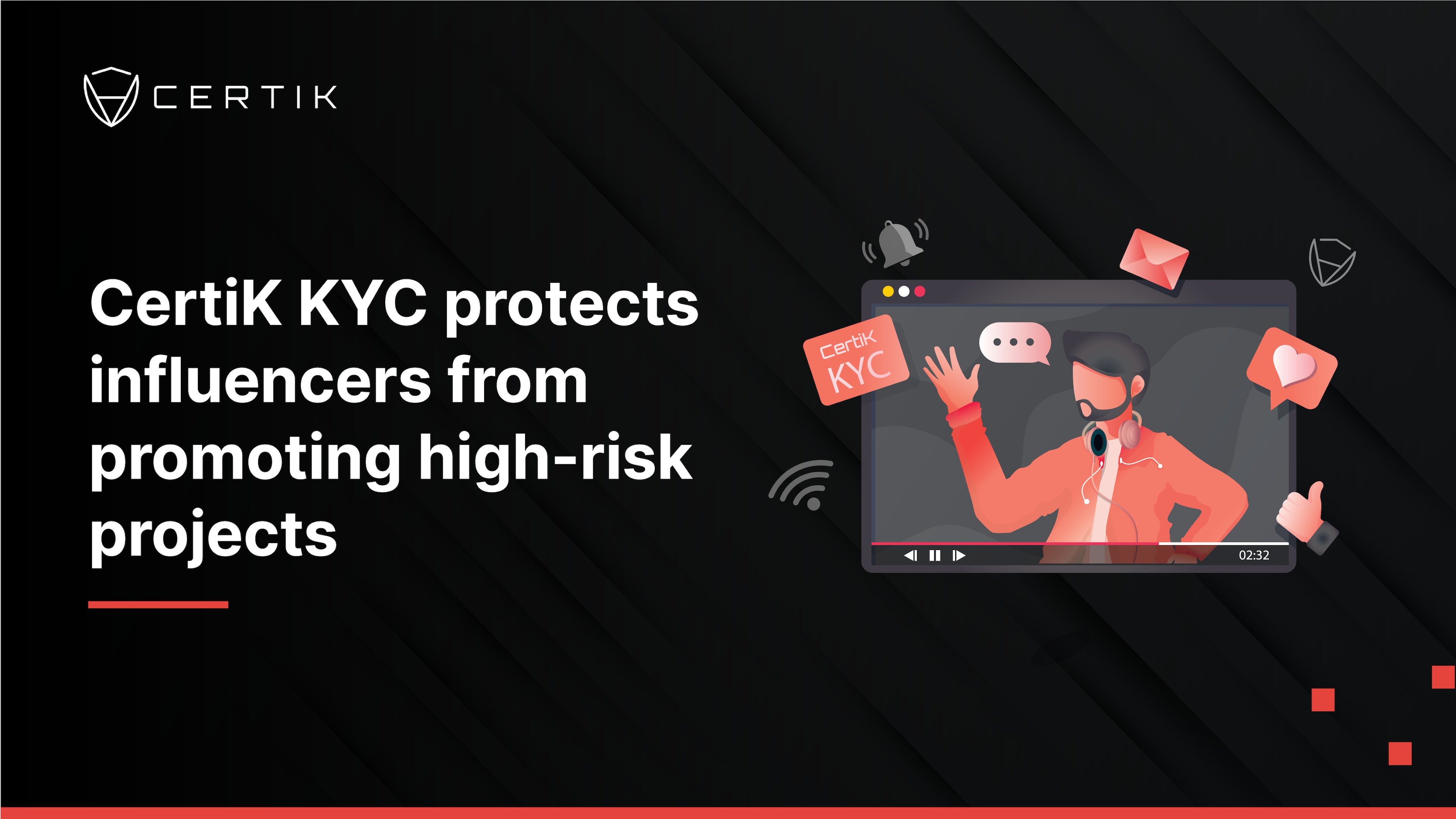 Influencer marketing has become an integral part of Web3 project development. According to a market survey conducted by Morning Consult, 45% of crypto owners would be likely to invest in a cryptocurrency if a celebrity endorses it. Meanwhile, a number of popular influencers have been accused of promoting scams, thus raising controversy and scrutiny from social media communities, journalists, and the authorities. This issue has adverse consequences for the victims, for influencers, and even for crypto startups, because it makes it more difficult for legitimate project teams to gain trust from the public.

Backlash on Influencers: From Jake Paul to Kim Kardashian

Major influencers have been publicly accused of promoting tokens that were alleged scams, most often pump-and-dump schemes. In this typical social scheme, an influencer is asked to promote a token, often using a misleading, deceptive project description, which artificially and temporarily inflates its price and volume. The token issuer then cashes out at an inflated price - illicitly collecting up to several million USDs, before letting the price drop. The token “project” is then usually left to die, and the followers are never able to recover their money. A vast array of high-profile influencers, including Ice Poseidon, Adin Ross, Tana Mongeau, Sam Pepper, Faze Kay, Faze Teeqo, Faze Jarvis, Faze Nikan, RiceGum, Tekashi 69, and Lil Uzi - among many others, have been the subjects of such public accusations. A series of celebrity influencers, such as Jake Paul, Ben Phillips, Nick Carter, Soulja Boy, Lil Yatchy, Paul Pierce, Marc Cuban, and even Kim Kardashian, have faced class-action lawsuits for promoting similarly alleged crypto-scams. Federal agencies, who are increasingly catching-up and responding to these alleged abuses, have started to prosecute influencers, starting with John McAfee, DJ Khaled, and Floyd Mayweather Jr.

Endorsing a crypto-project is very different from endorsing a regular consumer product because malicious crypto actors are setting up fraudulent or fake projects, designed to mislead retail investors and steal their funds. Studying the project documentation can help, but is often insufficient, as scammers will simply mimic the presentation of legit projects, concealing their scheme, true identities, and location so they cannot easily be held liable nor accountable. It is important to understand that disclaimers such as “Not Financial Advice”, “DYOR”, and “Paid Partnership” are not enough to protect influencers and investors. The increasing number of public backlash, lawsuits, and prosecutions demonstrate that influencers who partner with illegitimate crypto-projects are now facing an increased operational, reputational and legal risk. When such a scam happens, the fans and followers unfairly lose their hard-earned savings, the influencer’s reputation and trustworthiness is tainted, and she or he can expect to face accusations, lawsuits and future prosecution, sometimes years after the endorsement.

Partnering with CertiK to Only Promote Verified Projects

Having a significant influence over a large, highly engaged, and sometimes, vulnerable audience, comes with heavy responsibility. Influencers are expected to take all available precautions before agreeing to promote or endorse a crypto-project. The most basic expectation in a crypto endorsement is to vet partners and conduct an appropriate level of due diligence. However, this can be complicated to objectively do by oneself. In order to systematically implement such verification measures, influencers can request crypto-projects to go through a full CertiK smart contract audit and on-chain monitoring, including the CertiK KYC Badge. Not only do CertiK’s engineers audit and monitor the code in order to assess and rate the level of technical risk, but CertiK’s in-house team of former law enforcement investigators and military intelligence analysts also conduct an audit and investigate the project team, including an extensive professional background investigation, in order to evaluate the risk of malicious and fraudulent enterprise. This next-level due diligence will not fully eliminate the risk of hacks, fraud, and loss, but screening out high-risk teams greatly reduces exposure to scams and provides an additional security layer for the project’s partners.

In order to ensure that a project team has been fully verified and has gone through a comprehensive background investigation, influencers can easily check if a specific project has been issued a CertiK KYC Badge on the Security Leaderboard. This should be an absolute requirement for an influencer before agreeing to a partnership with a crypto development team. A word of caution - if an influencer asks a crypto-project to go through this rigorous vetting and evaluation, and the team refuses to be fully verified, or finds excuses to not undergo such a process, it is an indicator that their real objective is not to develop a web3 product, but only to misappropriate cash at the expense of the influencer and their followers. 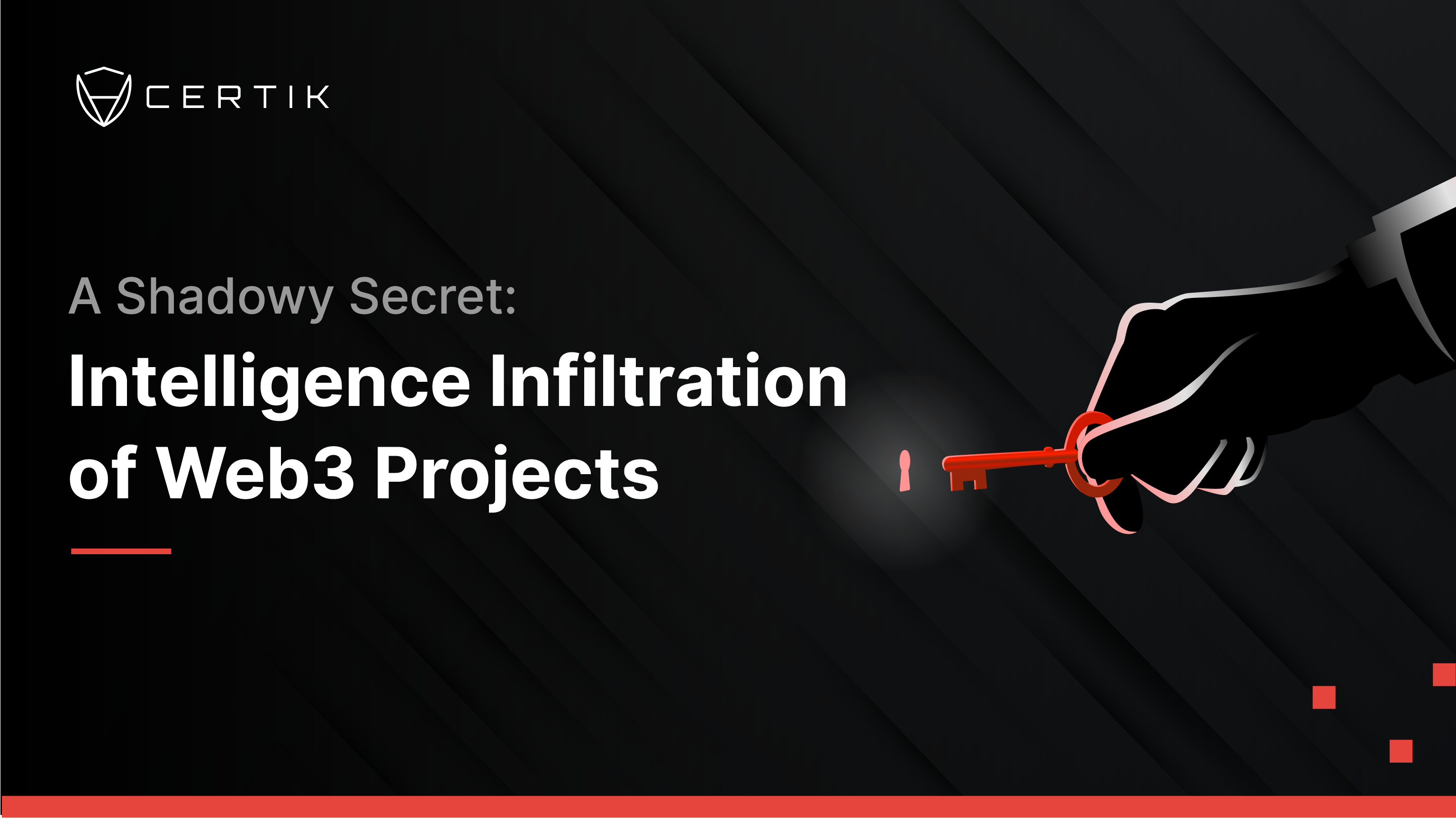 Blogs
A Shadowy Secret: Intelligence Infiltration of Web3 Projects
CertiK recently uncovered indications that Iranian intelligence operatives could be actively attempting to infiltrate some crypto projects early in their development phase. In this article, our team of former law enforcement investigators and intelligence analysts share their findings and give their expert takeaways on how to preserve the integrity of the Web3 industry. 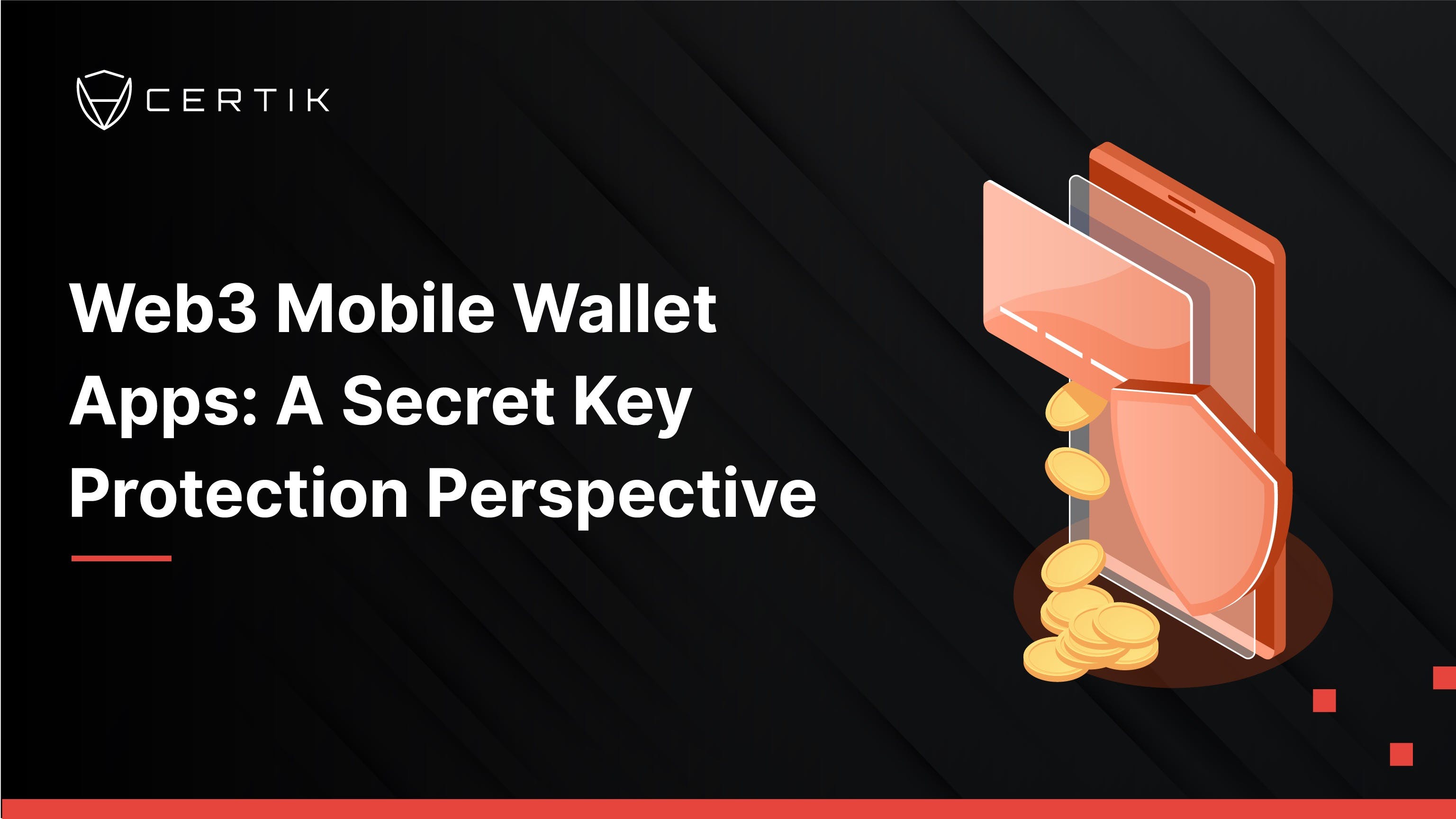 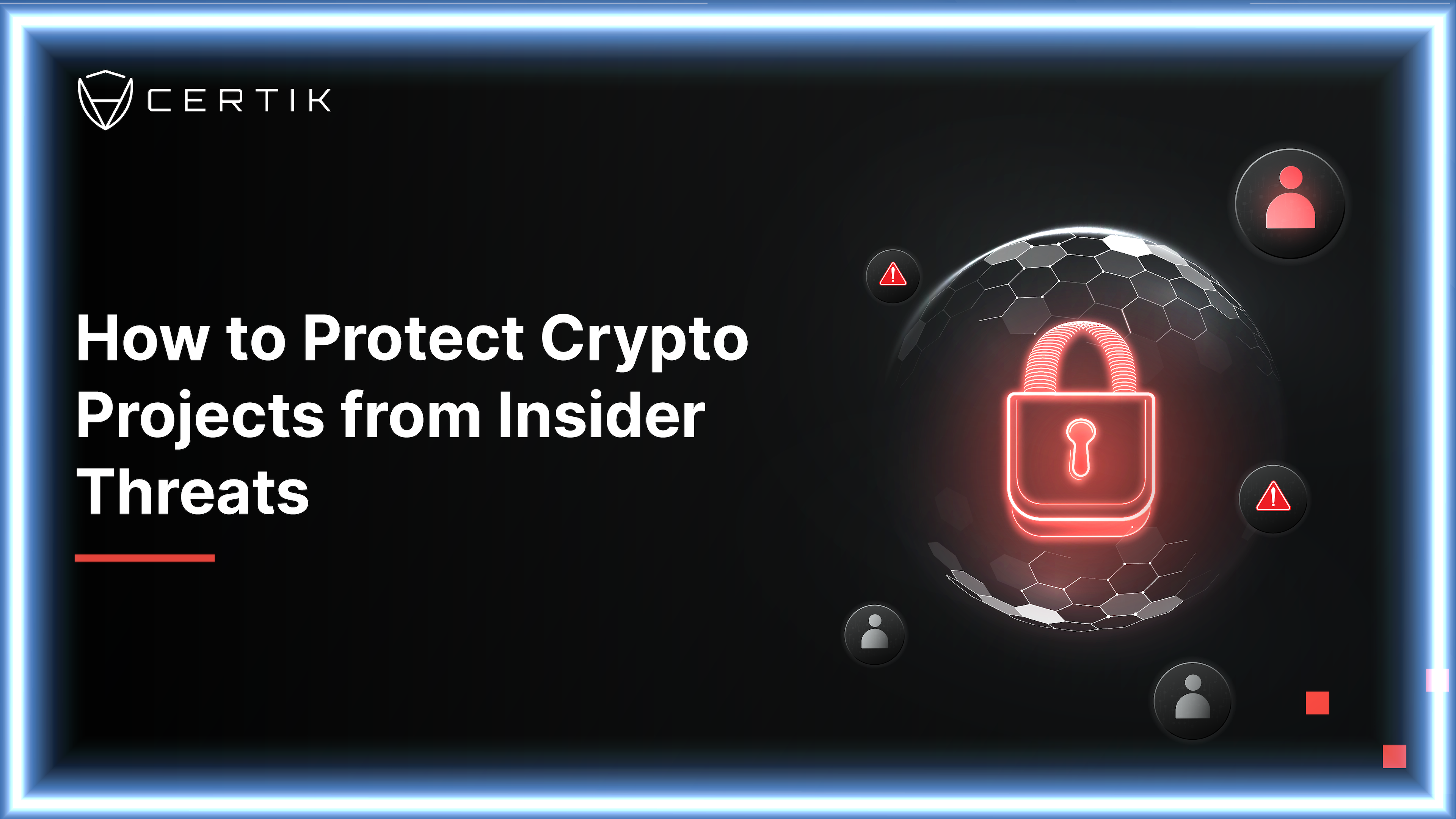 Blogs
How to Protect Crypto Projects from Insider Threats
Not all threats come from external sources. Some of the most devastating can come from inside a project team, from a trusted member of the group. A vital element in reducing the risk of insider threats in crypto projects is to thoroughly vet new team members.
© 2023 by CertiK. All Rights Reserved.
Products & Technology
Smart Contract AuditSkynetKYCPenetration TestingBug BountySkyTraceFormal Verification
Company
AboutBlogCareersDisclaimerPrivacy PolicyCookie PolicyTerms and Conditions
Social Media
CertiKSecurity LeaderboardCertiK AlertTelegramYoutube
MediumLinkedIn
Wechat
Discord
MediumLinkedIn
Wechat
Discord
© 2023 by CertiK. All Rights Reserved.