On Aug 1st, 2022 the Nomad bridge experienced an exploit causing a loss of around $190M worth of assets. The vulnerability was in the initialization process where the “committedRoot” is set as ZERO. Therefore, the attackers were able to bypass the message verification process and drain the tokens from the bridge contract.

Nomad Bridge, a cross-chain bridge between Ethereum, Moonbeam, Avalanche, Evmos and Milkomeda was exploited for ~$190M. The exploit occured when a routine upgrade allowed verification messages to be bypassed on Nomad. Attackers abused this to copy/paste transactions and were able to drain the bridge of nearly all funds before it could be stopped.

Protocol Details: Nomad Bridge is a protocol allowing users to move digital assets between different blockchains. Asset issuers can deploy tokens across chains. Developers can build native cross-chain applications (xApps) with Nomad. The goal of Nomad is to provide the connective tissue to enable users and developers to interact securely. Nomad is a token bridge that allows transfers of tokens between Avalanche (AVAX), Ethereum (ETH), Evmos (EVMOS), Milkomeda C1, and Moonbeam (GLMR).

The Nomad token bridge appears to have experienced a security exploit that has allowed hackers to systematically drain the bridge’s funds over a long series of transactions.The vulnerability was in the initialization process where the “committedRoot” is set as ZERO. Therefore, the attacker was able to bypass the message verification process and drain the tokens from the bridge contract. Due to this flawed upgrade, users could exploit bridge funds by copying the original hacker's transaction calldata and replacing the original address with a personal one. The transaction then processed and successfully removed funds from the bridge. At this time, ~$190M has been exploited. In four hours, other hackers, bots, and community members replicated the initial attack, draining it in a frenzied mob attack in what twitter user @0xfoobar called, “...the first decentralized crowd-looting of a 9-figure bridge in history?” Nomad tweeted: “We are aware of the incident involving the Nomad token bridge. We are currently investigating and will provide updates when we have them.”Nomad (⤭⛓🏛) on Twitter

There are multiple attacks txs

Take transaction 0xa5fe9 as an example. 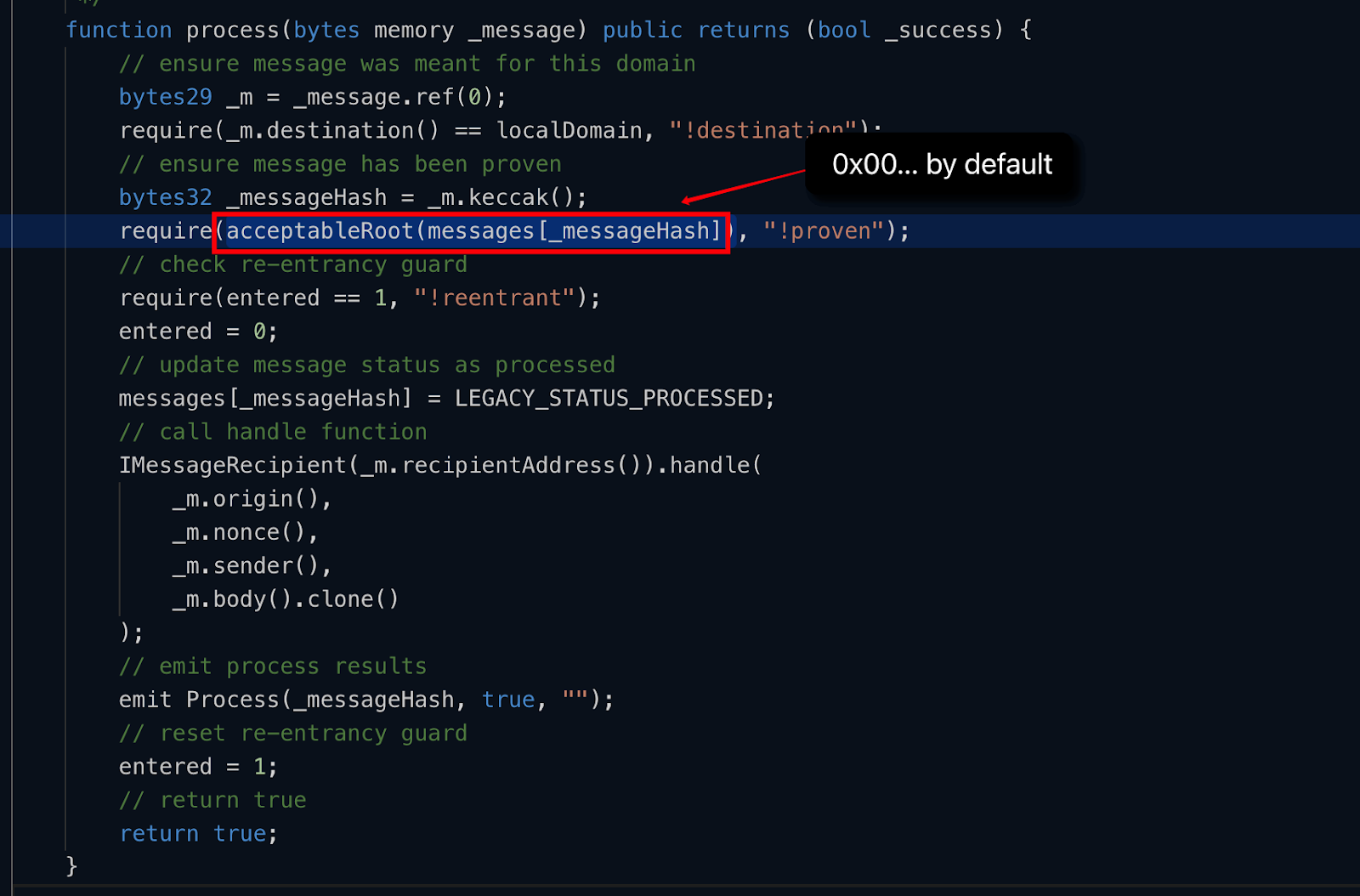 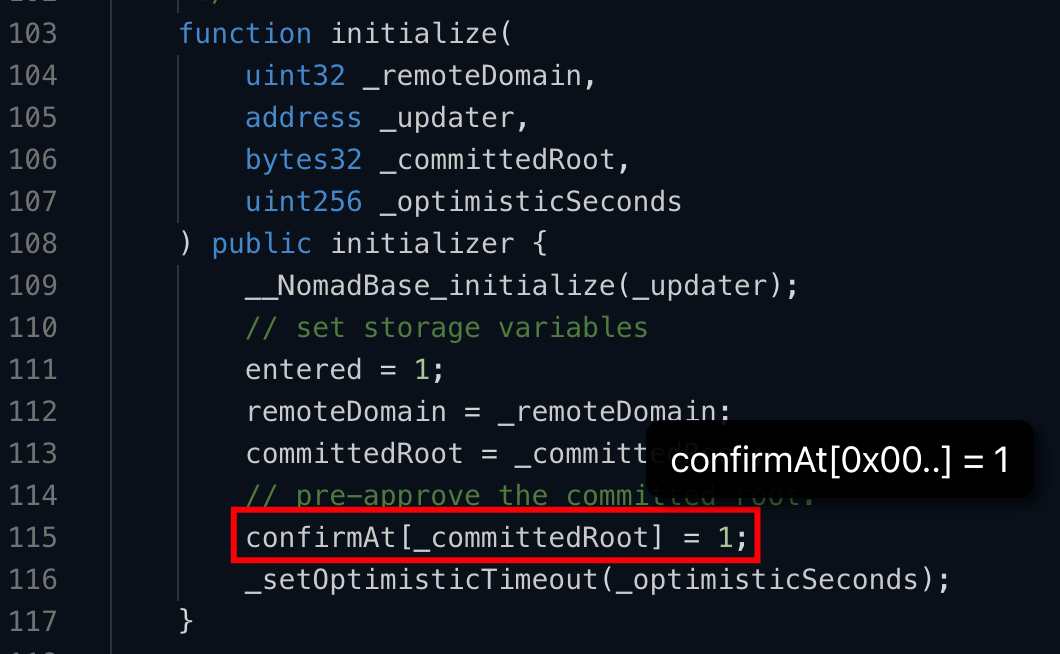 The Replica contract was mistakenly initialized in the transaction 0x53fd9, in which the “committedRoot” is initialized as ZERO.

Therefore, the attacker can directly call the “process(byte memory _message)” function with an arbitrary “_message” to bypass the verification.

The function process ensures the message hash is proven by checking acceptableRoot(). 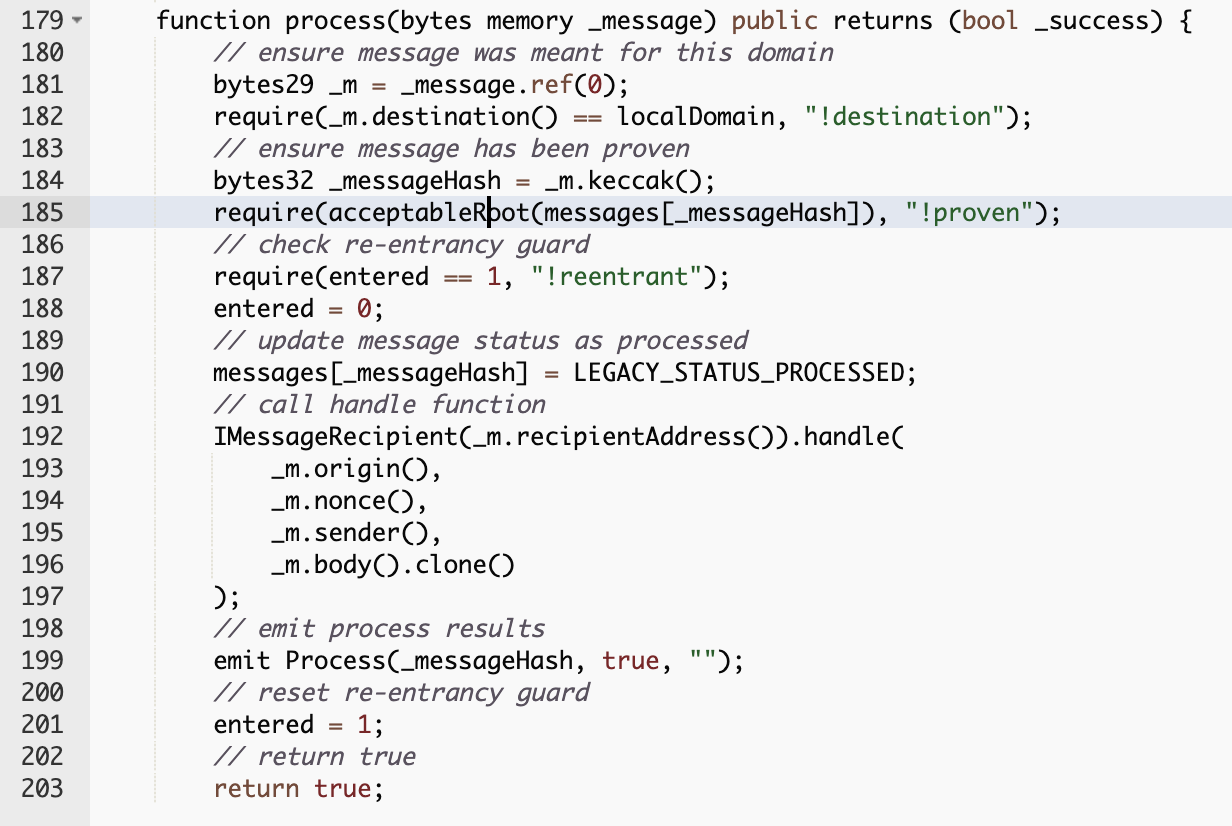 The function acceptableRoot() will check the root if it’s proven, processed or confirmed. 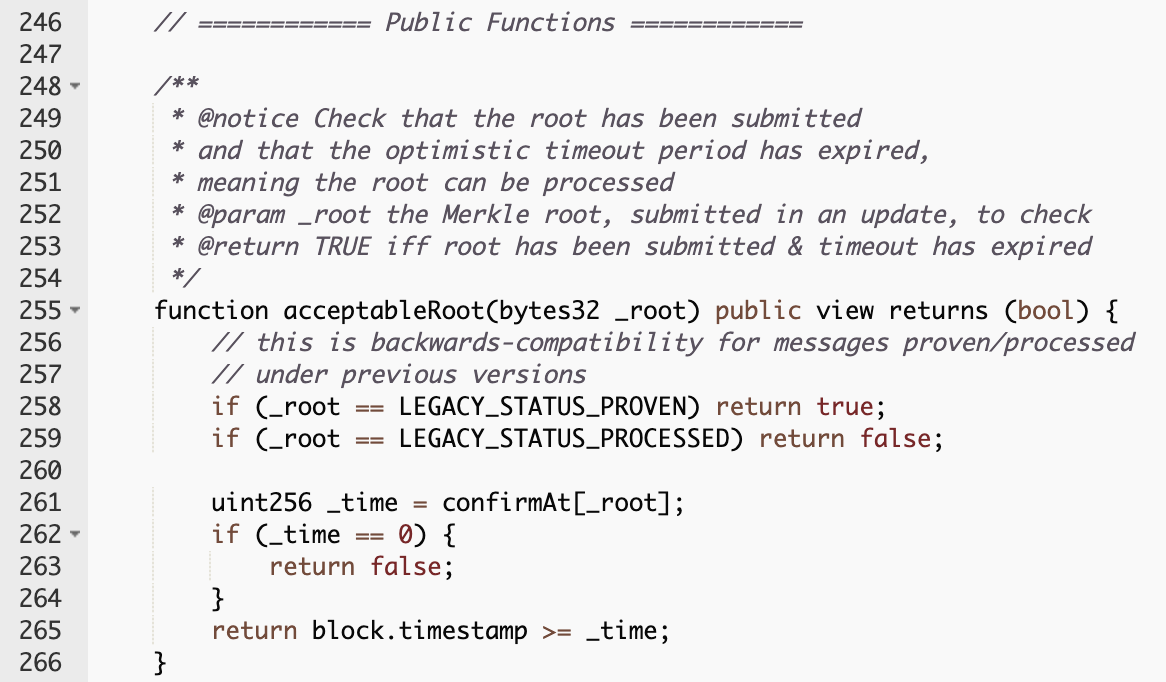 While in the initialization transaction 0x53fd9, the owner sends 0 and the confirmAt of 0 will be set as 1.

Thus, zero is considered as an acceptableRoot and can be checked in 0xb9233.

Based on the implementation of function prove(), the root of an unproven message is also zero and zero as a valid confirmed root can bypass the require check. The attacker just needs to call process send the transaction to the bridge and get the money. 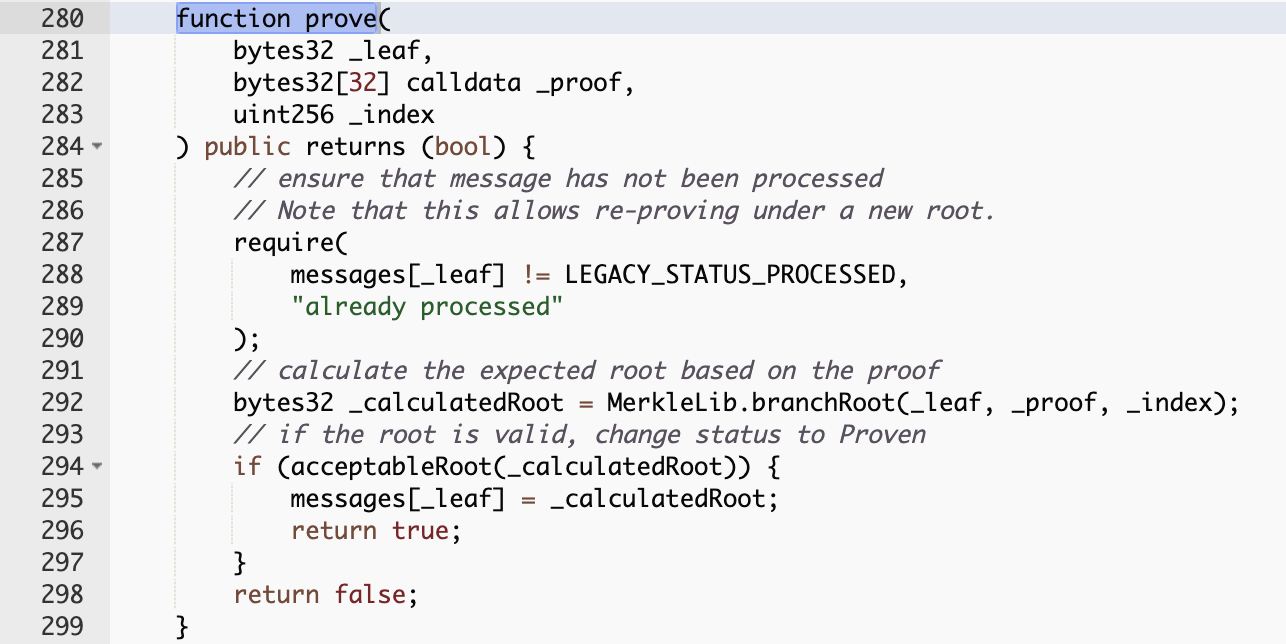 About 190M worth of tokens are drained from the bridge.

DefiLlama ← Current valuation of bridge and charts to the in and outflows.

Can the issue be found during the audit?

This type of issue would be difficult to discover under conventional auditing practices that assume all deployment configurations are correct, because this particular bug was introduced by mistakes in the deployment parameters. However, a broader auditing process and full-scope penetration test that includes validating deployment processes would potentially capture this bug. In addition, CertiK offers added service for the post deployment stage - Contract Verification which with in-depth analysis of smart contract analysis and post deployment contract verification. For more information, please contact bd@certik.com.

For full details on wallet addresses and amounts related to them, please contact CertiK’s Incident Response Team at qrt@certik.com.