At approximately 4:20 PM EST Aug. 09 2022, Curve Finance(http://curve.fi )'s DNS record was compromised and pointed to a cloned malicious site. The attacker injected malicious code into that site that asked users to give token approvals to an unverified contract. In total, 7 users were affected by the exploit culminating in ~$612k losses.

At approximately 4:20 PM EST Aug. 09 2022, Curve Finance(http://curve.fi )'s DNS record was compromised and pointed to a malicious site which was an exact copy of the legitimate webpage. However, on this cloned copy the attacker had injected malicious code that asks users to give token approvals to an unverified contract. If the user approved that transaction, the funds from the users-now-victims were then directed by the attacker using this malicious contract to the hackers address. Since the contract is unverified, we cannot confirm the exact functions of it at this time. Overall, $612,724.16 in USDC and DAI were stolen by the hacker, who then swapped the funds for ETH. The attack then sends ETH to the following locations:

This attack bares similarities with the Premint exploit that occurred on 17 July where malicious code was injected into the frontend of Premint’s website in order to scam users to set approval for all transactions. What’s different here is that the hacker deployed a malicious contract that when interacted with would redirect funds to the hackers wallet. Here is an example: 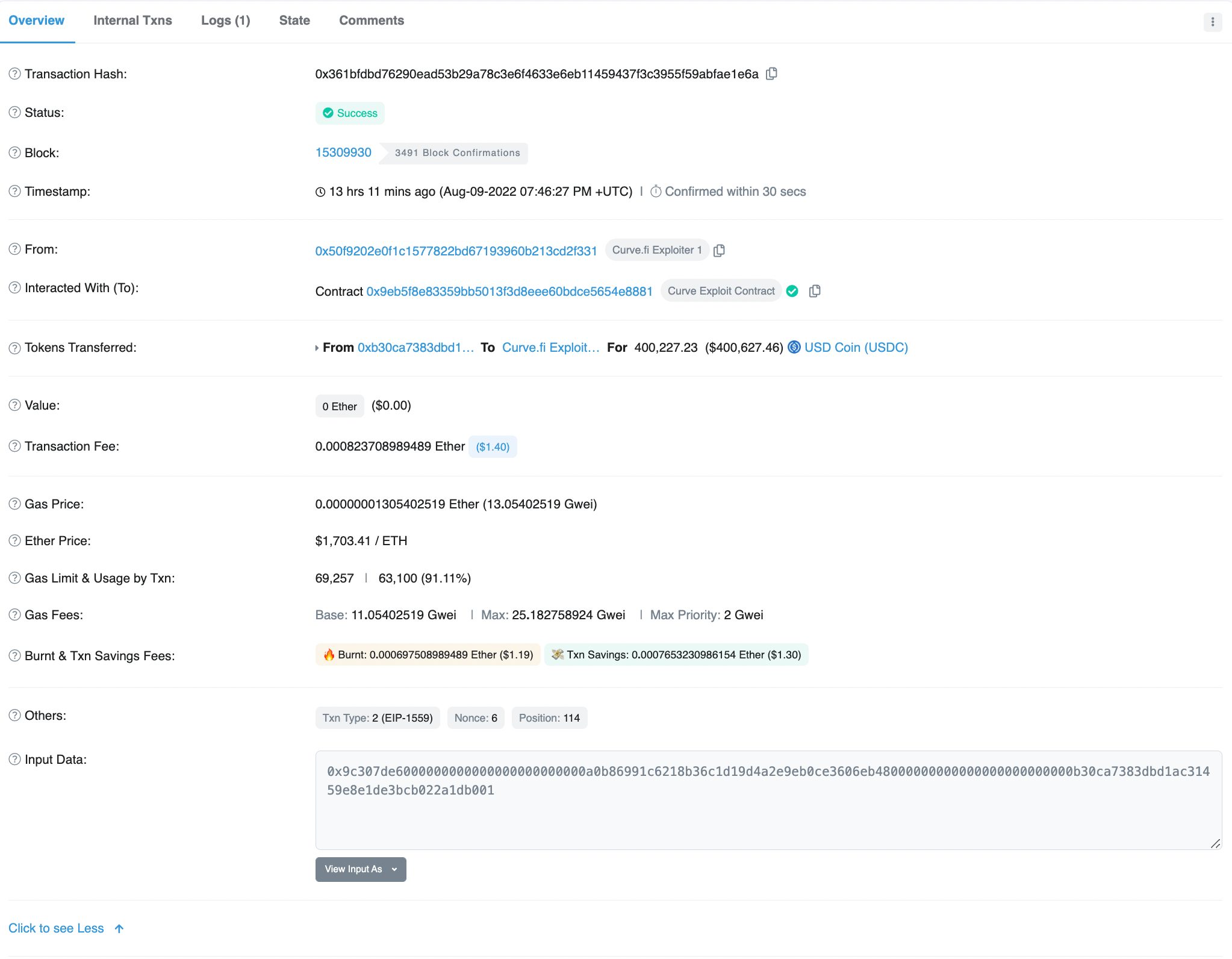 The victim wallet interacts with the exploiters contract and calls an unknown function (due to the contract not being verified) that transfers the victims funds straight to the hackers wallet. The malicious DNS would ask the user to approve all transactions for the malicious contract

Once the hacker had accumulated ~ 612k worth of stablecoins they are then exchanged for ~362 ETH.

FixedFloat tweeted that they froze 112 ETH of the stolen funds, however a total of 270 ETH was sent to the exchange. Here is one example of such transaction:

Whats also interesting to note is that this wasn’t a wallet drainer attack. When we look into one of the victims wallets, we see movement of funds that are unaffected by the attack. Here’s an example:

As we can see, the wallet continues to hold funds and even sent ~$240k to a smart contract, which then transferred the funds to Kraken 10. It is therefore likely that the attack only affected attempted transaction on Curve Finance.

This exploit is another example of how a Web2 vulnerability can seriously affect users in Web3. Be it Discord hacks, Twitter compromises or website exploits, Web2 infrastructure often holds a single point of failure leading to devastating losses. Due to these centralized issues, it is perhaps on the easiest ways to exploit Web3. Unfortunately this means that we can expect to see these types of attacks to continue going into the future.

This exploit is another example of how damaging Web2 vulnerabilities can be in the Web3 space. The hacker compromised Curve Finance DNS which pointed users to a site with malicious code. This is similar to the Premint hack where the exploited injected malicious code to get users to sign a SetApprovalForAll() function which effectively transferred users NFTs to the exploits wallet. 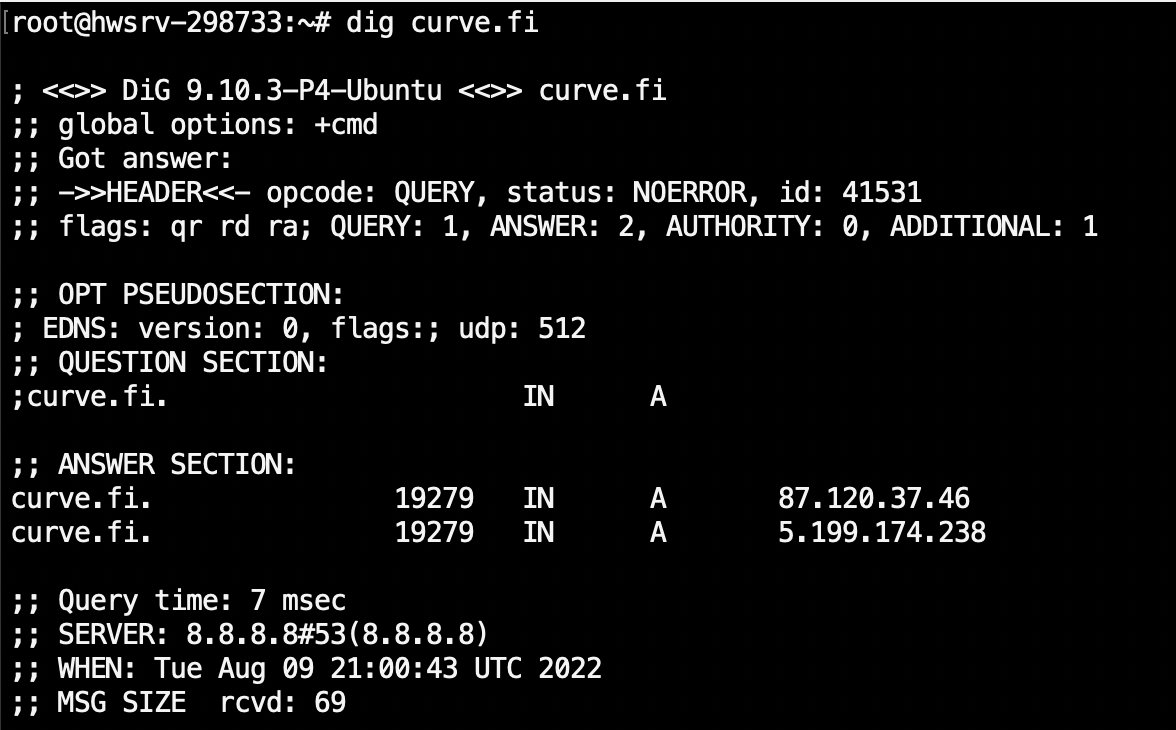 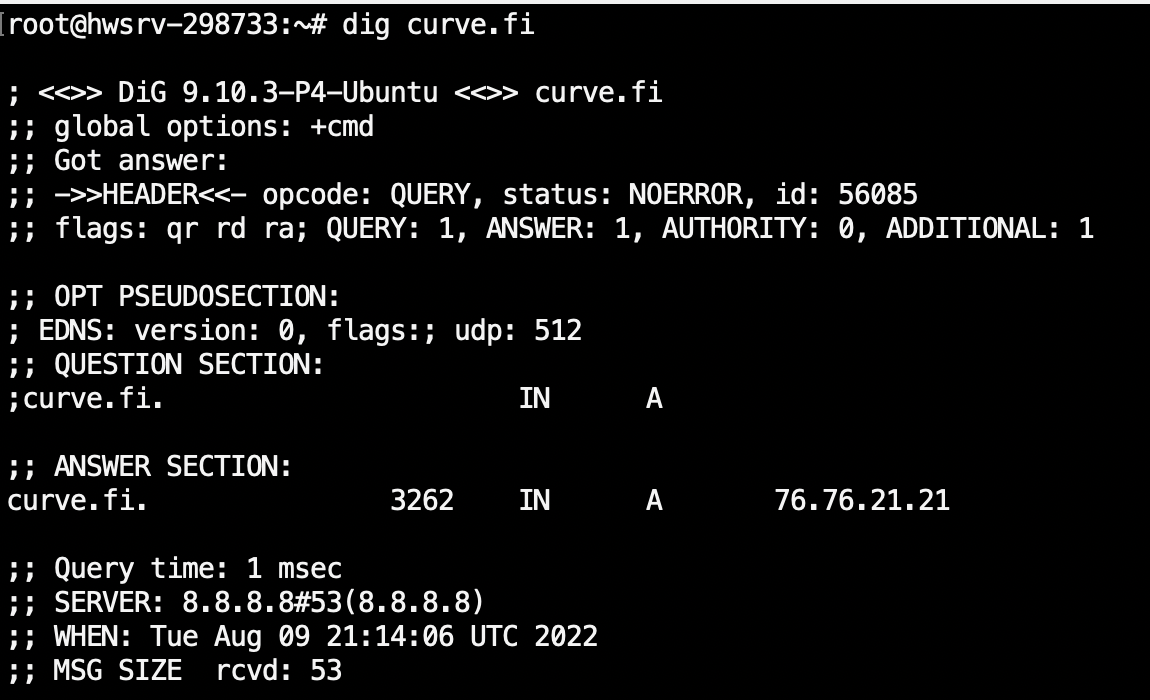 Using SkyTace, we can see that there are 7 unique victims in this attack. Once the funds entered the hackers wallet, they were swapped for ETH and then sent onwards FixedFloat and Binance with an additional 27 ETH being sent to Tornado Cash. 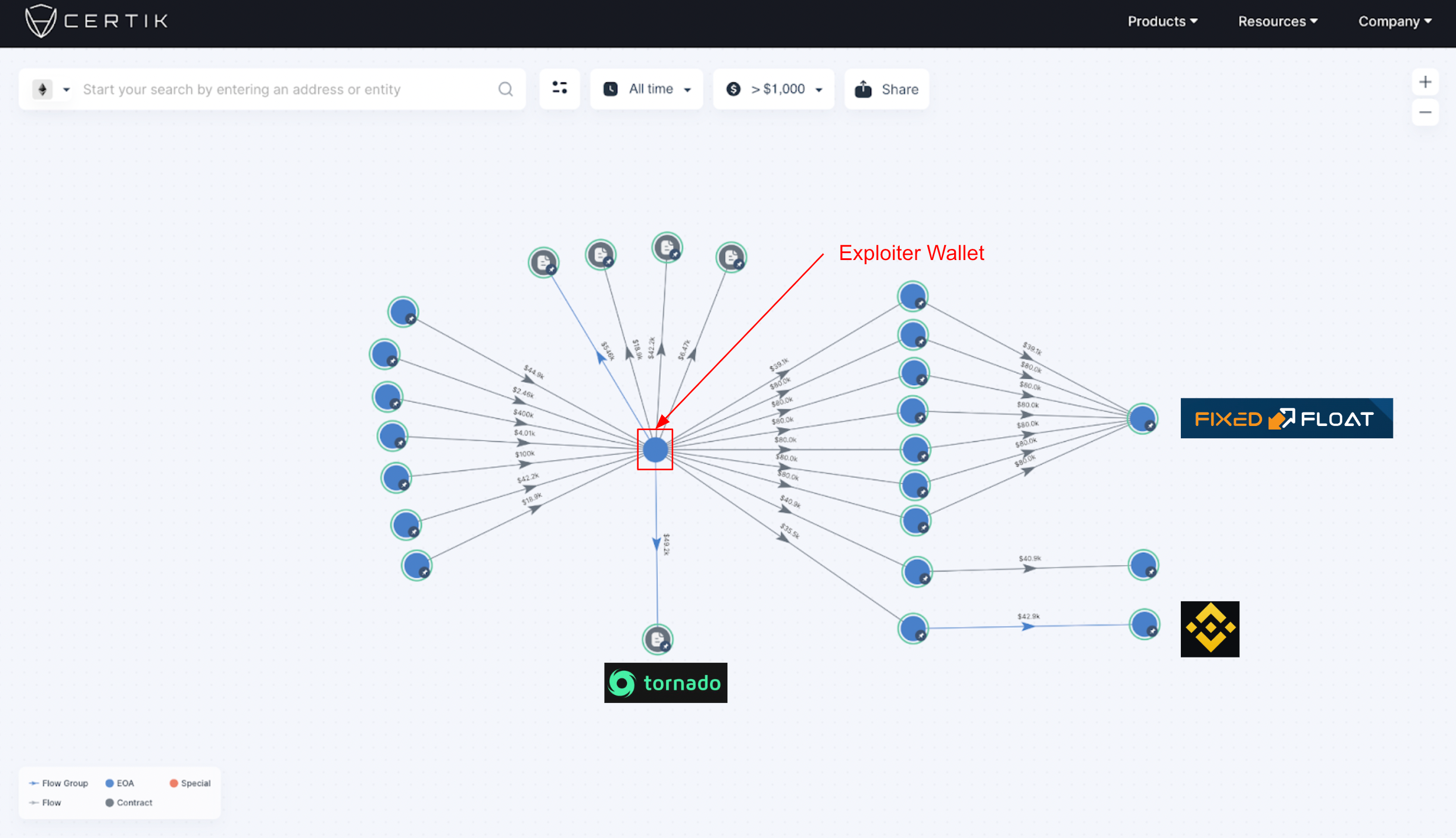 By following CertiKAlert on Twitter, you’ll be the first to be alerted on exploits, hacks and exit scams as they happen. Follow CertiKAlert to be notified first and help us spread the word on exploits where we can together help secure Web3.

Analysis Reports
Novo Defi Incident Analysis
On 29 May 2022, Novo Defi’s token, Novo, was exploited via a flash loan attack. The incident caused a loss of ~278 BNB