Products
Resources
Company
Back to all stories
Technology
What is Web3?

Since the internet was invented in the 1990’s it has continued to grow rapidly while changing the world as we know it. It all started with Web 1.0 which people also call the “read-only web” or the “static web” with sites that had static content mainly in text or image format. Some describe it as a “one-way highway with a narrow footpath where content creation was done by a select few and information came mostly from directories” which made it extremely hard for users to find relevant information.

The next stage was Web 2.0, or the “social web” which was more interactive thanks to advancements in web technologies like Javascript, HTML5, CSS3, etc. and introduced new platforms such as Youtube, Facebook, MySpace, Wikipedia, and more. Web2 refers to the version of the internet most of us are familiar with today. The rise of Web 2.0 was largely driven by three core layers of innovation: mobile, social and cloud. An internet dominated by large companies that provide services in exchange for your personal data. However, people are slowly waking up and realizing how important that personal data is when in the hands of these large companies.

So this brings us to the next stage of the internet, Web 3.0. What is Web 3.0 and what changes will it bring to the internet as we know it today? Many people say that 3.0 combines the decentralized, community-governed ethos of Web1 with the advanced, modern functionality of Web2. While improving Web2, Web3 also has a variety of other characteristics that will help transform the internet such as: 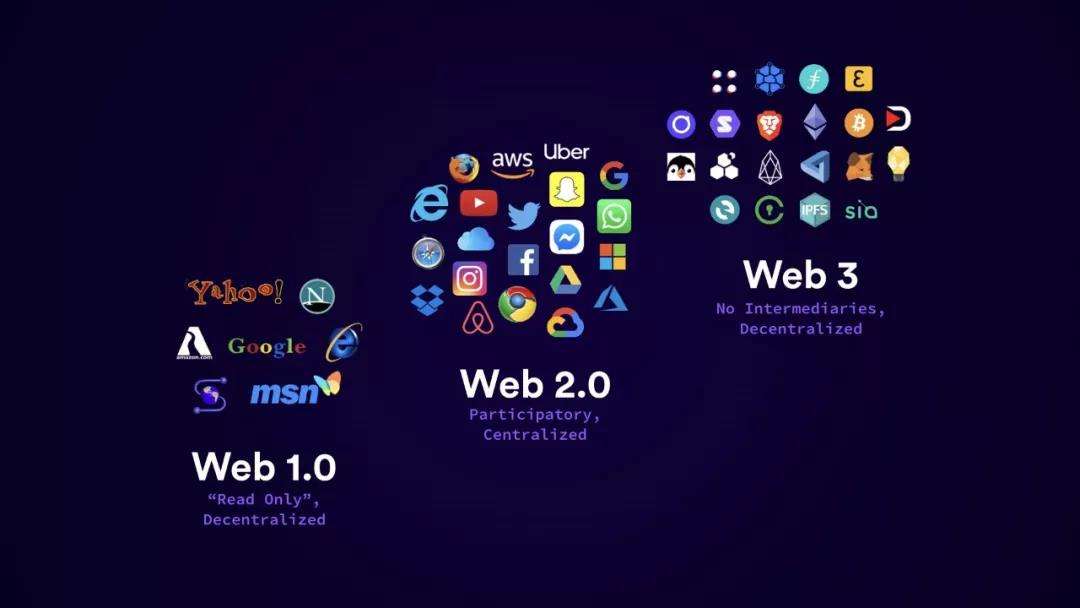 Some technologists have expressed that Web3 could improve data security, scalability, and privacy beyond what is possible on traditional Web 2.0 platforms. With large corporations such as Google, Facebook, and Amazon continuing to grow and use people’s data for some not so ethical practices, security and privacy is becoming increasingly important. Many people say data is the new oil and is more valuable. If this is the case, why should users be giving it away for free to these tech giants?

One big difference between Web3 and the previous versions is the use of tokens and a token economy. Whereas before if a start-up or tech company wanted to grow, they would need VC funds and have to give away ownership to these well-funded groups. The benefit of token economy comes in three main points: Governance, Transparency, and Token Sales.

With the blockchain being transparent, open, and public, purchasers can see everything that is happening with the company they have invested in or bought tokens for. In the modern internet and tech companies, there are hidden private sales or investments that companies don’t disclose to the public for a number of reasons.

One of the major advantages of crypto is community governance. Web3 combines the decentralized, community-governed ethos of Web1 with the advanced, modern functionality of Web2. Tokens give users property rights, basically the ability to own a piece of the internet. NFTs give users the ability to own objects, which can be art, photos, code, music, text, game objects, credentials, governance rights, access passes, etc.. Web3 is the internet owned by the builders and users, orchestrated with tokens.

In a recent article on ethereum.org, Florian Sesser described a few practical key differences between Web2 and Web3 that affect how we see and use the internet right now as shown below:

He also notes a few key reasons why developers would prefer to use dApps built on Ethereum compared to the traditional building used in Web2 such as:

NFTs, cryptocurrencies, metaverse, and other blockchain entities are going to be crucial to Web3, but it also goes beyond just crypto. It offers a new way that combines the best aspects of the previous eras. Many users see the internet as a static thing without even noticing the various stages it has undergone, but the future of it is a decentralized and fair internet where users control their own data, identity and destiny.

Blogs
Web3 Mobile Wallet Apps: A Secret Key Protection Perspective
The security of private keys and mnemonic phrases is of paramount importance in the world of cryptocurrency, as they grant access to one's digital assets and their loss or theft can lead to financial ruin. With the rise of mobile wallet apps in the Web3 space, it's crucial to understand the various security mechanisms that are in place to protect these keys.
© 2023 by CertiK. All Rights Reserved.
Products & Technology
Smart Contract AuditSkynetKYCPenetration TestingBug BountySkyTraceFormal Verification
Company
AboutBlogCareersDisclaimerPrivacy PolicyCookie PolicyTerms and Conditions
Social Media
CertiKSecurity LeaderboardCertiK AlertTelegramYoutube
MediumLinkedIn
Wechat
Discord
MediumLinkedIn
Wechat
Discord
© 2023 by CertiK. All Rights Reserved.