Products
Resources
Company
Back to all stories
Blogs
What is NEAR Protocol?

NEAR protocol is a layer 1 blockchain with big ambitions. With its declared mission to put usability first and change the world of web3, NEAR is set to open out the web3 space to millions of new developers, programmers, and users.

As a smart contract enabled, layer 1 blockchain, NEAR Protocol has inevitably been positioned as a competitor to the Ethereum network, and is placed alongside a handful of other layer 1 networks such as Polkadot and Solana as ways to provide more scalable alternatives to Ethereum.

Within this, NEAR distinguishes itself with its ambitious speeds, which are set to reach 100,000 tps once it is fully implemented, making it capable of speeds well and beyond the current 7000 tps of Visa. Throw in transactions that reach finality in 1-2 seconds and that cost less than a penny, and it's no wonder why many developers are flocking to NEAR. 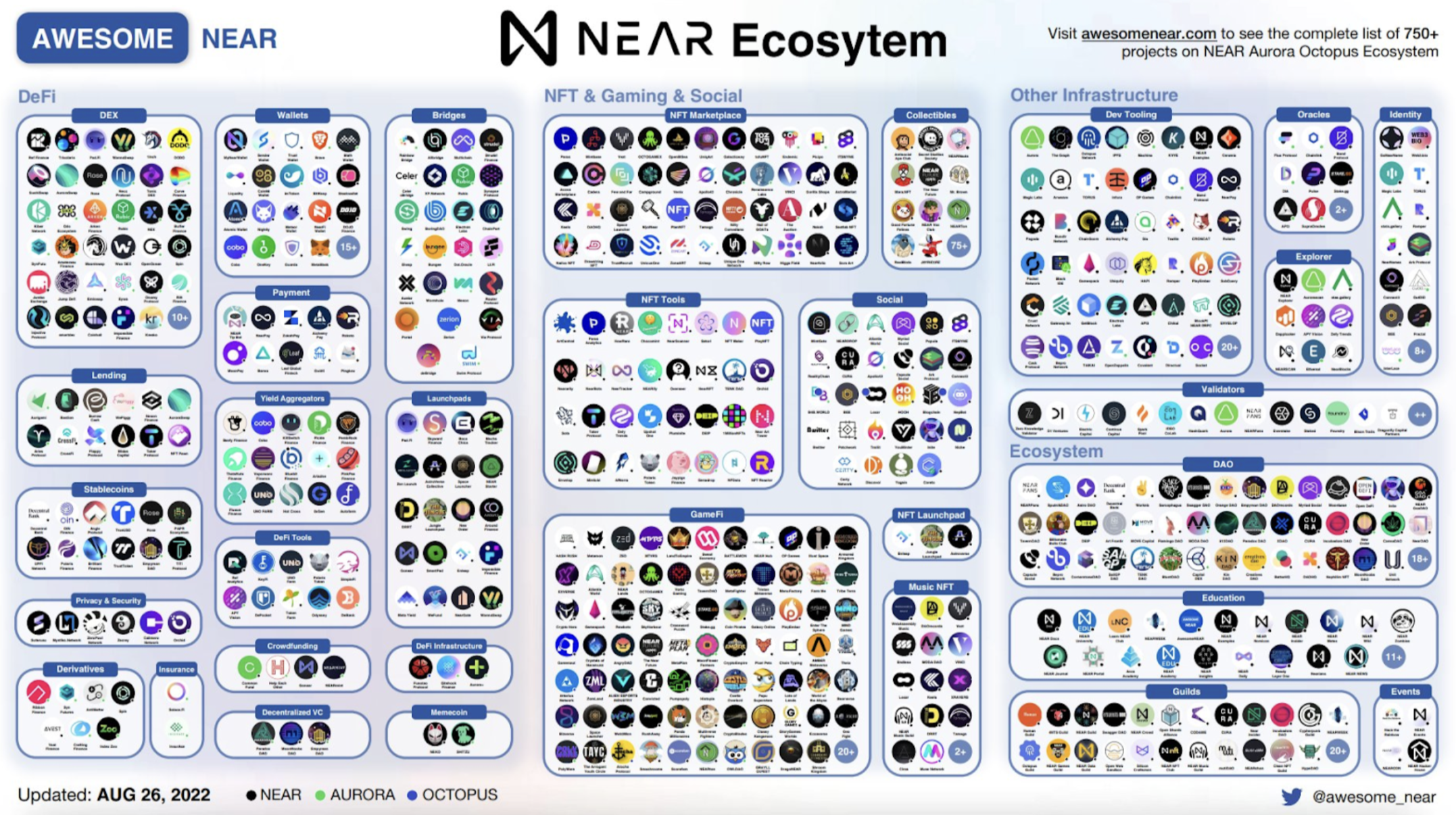 This article will serve as an introduction to NEAR Protocol, unpack some of the innovations of its underlying technology, and underscore the importance of securing the NEAR ecosystem with a NEAR smart-contract audit.

How it does it

NEAR achieves these numbers through its innovative use of sharding. Sharding is the process by which the network is split into fragments –‘shards’-- so as to lessen the computational throughput on each node. This system means that each node only has to handle the portion of the network’s code that is designated to it, rather than having to run all of it each time.

This allows the network to scale as nodes are able to conduct computation alongside one another, thereby lightening the load required of each node. The capacity of the network only increases as new nodes join, meaning that the more nodes in the network, the faster it gets.

One way to understand this process is to imagine a group of teachers and a set of exams that need to be marked. Where in previous systems, each teacher would have to mark every exam individually, a sharding system breaks the exams into separate portions and assigns each portion to a grouping of teachers. Once marked, these groups can then communicate their results to each other. This model clearly reduces the time spent marking exams, as it drastically reduces the workload required of each teacher. We can then also see how more teachers joining the cohort would only increase this speed, as the task of marking could be spread out more broadly.

Now, many blockchains have used sharding to scale, and NEAR is not the first to do it. What sets NEAR apart is how it implements sharding in its innovative new technology, which it calls Nightshade.

Nightshade works by breaking the underlying blockchain into shards– rather than just validator sets– in what NEAR describes as a “fully sharded network”. This process is called ‘state sharding’, and involves the division of not only the processing power required of the blockchain, but also the storage. Whilst the full implications of this system will be unpacked in a later blog, what is important to know here is that this effectively splits the blockchain itself into ‘shards’ rather than just distributing responsibilities amongst its validators. This makes NEAR able to scale far more effectively than in conventional shading methods as it is able to achieve a more thorough division of labor between each shard.

NEAR uses a proof of stake (PoS) consensus mechanism in which nodes that want to participate in the NEAR network must stake the blockchain’s native token, NEAR, to be able to participate.

Validators are then chosen by an auction system that occurs approximately every 12 hours (known as an ‘epoch’). Token holders are given the option to delegate their stake if they do not want to become validators themselves, and those with bigger amounts staked have a greater influence over the consensus process.

Some advocates of PoW argue that the system allows for increased decentralization given that the process of winning the right to become a validator is an open competition, and not biased based on who has a bigger stake. However, the reality of large PoW chains such as bitcoin have proven otherwise. Mining farms have grown into their own industry, one that requires prohibitively expensive equipment which the average person cannot compete with.

Indeed, PoS networks like NEAR are arguably more decentralized than their PoW counterparts, given that now more people have the resources to become a validator through staking than they would through mining.

One of the ways that NEAR innovates within its PoS mechanism is by introducing the novel function of stake farming.

Prior to NEAR, projects built on PoS networks were excluded from the benefits of PoS rewards, and this resulted in a misalignment of interests between validators, and the projects built on the network. Given that both validators and projects are essential for the upkeep and continued growth of the ecosystem, such a misalignment can breed disharmony in two vital pillars of a network, and cause problems down the road.

NEAR resolves this through the introduction of stake farming. With stake farming, ecosystem projects are now able to partner with validators to distribute more than one token to the delegators in securing the network. This allows newer projects in the NEAR ecosystem to take part in securing the network, whilst simultaneously allowing validators to attract more capital.

In this way, stake farming fosters collaboration between validators and ecosystem projects, creating mutually beneficial occasions to work together, and aligning their interests. It also has the added benefit of further decentralizing the NEAR network, as validators have the opportunity to support emerging NEAR projects from across the ecosystem. This gives NEAR validators the unique opportunity to attract more capital while ensuring new and growing projects can take part in network security. As the first proof-of-stake blockchain to support stake farming contracts, NEAR is leading the way in creating a more inclusive ecosystem.

Securing NEAR protocol with CertiK’s NEAR Smart-Contract Audit

NEAR’s arrival in the web3 ecosystem is set to welcome a diverse cohort of developers and programmers into the space. As more projects seek to build and innovate with the game-changing technology that NEAR offers, it is vital that they implement practices of end-to-end security. This begins with having regular and thorough NEAR smart-contract audits that steel your project against attack.

By providing a real-world use case for the cutting edge in computer science research, the leading AI technology, CertiK’s NEAR smart-contract audit rigorously checks every line of code, flagging hard-to-spot vulnerabilities and providing actionable insights on how to remediate them.

In addition to this, CertiK is the first to offer KYC verification for project teams as part of its NEAR smart-contract audit. This is a vital tool for project teams to build trust and transparency within the current web3 landscape. With security being top of most users’ and investors’ minds when looking for projects to participate in, having had both a NEAR smart-contract audit and KYC verification before launch put a project on the best possible footing with their communities.

Yet of course, the security of the NEAR ecosystem does not end with a NEAR smart-contract audit. Rather, CertiK offers a complete range of web3 security tools, beyond the NEAR smart-contract audit, that are designed to steel the growth of the NEAR ecosystem against attack. Key to this is blockchain analytics tools such as CertiK’s Skynet and SkyTrace, both of which give NEAR projects an unparalleled overview of their on-chain activity after launch. This saves vital time in anticipating and responding to attacks.

Lastly, CertiK has recently expanded its security offering to include a new bug bounty service. This effectively crowdsources security from a range of verified white-hat hackers, each specially selected by CertiK for their experience and reliability. This added feature is designed to work in tandem with the NEAR smart-contract audit to create an even sharper analysis of a project’s code, and deliver a more diverse package of security insights and protections.

Analysis Reports
Bacon Protocol Incident Anaylsis
On March 5, 2022, Bacon Protocol experienced an exploit via a flash loan attack for loss of nearly $1 million to the protocol. The exploit appears to result from the attacker taking advantage of a reentrancy issue within the lend() function of Bacon Protocol. Since the incident the project recognized the attack and reaudited contracts completely. Soon after they would rebrand as HOME Coin and recapture momentum.
© 2023 by CertiK. All Rights Reserved.
Products & Technology
Smart Contract AuditSkynetKYCPenetration TestingBug BountySkyTraceFormal Verification
Company
AboutBlogCareersDisclaimerPrivacy PolicyCookie PolicyTerms and Conditions
Social Media
CertiKSecurity LeaderboardCertiK AlertTelegramYoutube
MediumLinkedIn
Wechat
Discord
MediumLinkedIn
Wechat
Discord
© 2023 by CertiK. All Rights Reserved.