To understand exactly how Avalanche is a game-changer within the web3 ecosystem, we first have to understand how it works to both disrupt and resolve some of the longstanding problems that have faced the blockchain industry.

Perhaps the most important among these is the scalability problem, which for a long time has been one of the biggest barriers to mass adoption.

This blog post will take you through the history of the scalability problem, look at some of the various attempts to solve it, and spotlight how Avalanche has resolved it through its innovative use of subnets. It will then go on to outline the importance of fostering security amongst the subnet ecosystem through Avalanche smart-contract audits and other security tools.

The problem of scaling blockchains is in many ways a problem of success. In the early days of bitcoin, the number of users and transactions that the network had to handle was relatively small, and as such, it wasn’t difficult to keep the network both cheap and fast.

To understand why this is, we have to look at the architecture of a blockchain. Each ‘block’ in a blockchain has the capacity to contains a limited number of transactions. So, bitcoin has a blocksize of 1MB, which means it can store around 2,759.12 transactions per block.

New blocks are created through a process of ‘mining’, in which miners process complex computational equations in order to produce a new block, and are subsequently rewarded with the ‘block reward’ which is currently set at 6.25 BTC. On average, a new block is created every ten minutes.

The so-called ‘scalability problem’ comes in the tension between three vectors: the amount of data a block can store, the time it takes to generate a new block, and the number of transactions that the network has to handle. The congestion this causes means that bitcoin can only handle 7 transactions per second (tps), and transactions can take hours to complete. In turn, this congestion drives up gas fees (the fee given to miners for validating transactions) as miners set their fees based on the supply and demand of the network. This means that the more throughput on the network, the higher the gas fees.

For a technology with ambitions to become a currency used in everyday life, the blockchain community saw that crypto needed to get a lot faster, a lot quicker, if it was to be able to handle the scale necessary for mass adoption.

Over the years, the blockchain community has proposed a number of solutions to the scalability problem. One landmark debate within bitcoin was over whether or not to increase bitcoin’s block size. This was proposed as one solution to the scalability problem, as, with each block being able to hold more transactions, the network could handle more throughput before a new block was required.

However, this was hotly contested by individuals who saw increasing bitcoin’s block size as a violation of one of bitcoin’s founding tenets: decentralization. This was because increasing block size, whilst increasing capacity, would make it much harder for individuals with less computing power to run a node on the network. This in turn would make bitcoin less decentralized as the nodes would be concentrated in the hands of fewer people.

The debate, known as the Blocksize Wars, led to those in favor of increasing the block size splitting off and forming alternatives to bitcoin, two of which are still around today in the form of Bitcoin Cash, and Bitcoin SV.

However, whilst increasing the block size did partly reduce fees and increase speed, other more complex solutions have emerged since then which have had more success.

Many of these have been made possible by Ethereum’s introduction of what are called ‘Layer 2 blockchains’ (L2s). As the name suggests, L2s are blockchains that are built on top of a primary L1 blockchain like Ethereum, which it regularly communicates with by submitting bundles of transactions. In this way, an L2 extends the L1 by carrying some of the weight of its transactions, whilst also benefiting from the decentralization and security of the L1’s network.

The most common L2 scaling solutions that do this are known as ‘rollups’, which the L1 uses to effectively export the work of processing the transactions. Once done, the L2 communicates the transaction data back to the L1, where it is subsequently inscribed on the blockchain.

Avalanche introduced a novel solution to the scalability problem that in many ways brought together the best of the previous technology, whilst also making possible new functionalities that were hitherto impossible.

They are called subnets: individually separate blockchains that have their own set of rules and parameters, whilst remaining a part of the primary network.

Subnets work as effective scaling solutions by allowing a wide range of validators to participate in consensus. It does this by stipulating that validators of a subnet must first stake AVAX tokens on Avalanche’s primary network, which in turn secures Avalanche’s three built-in blockchains.

In this way, subnets work in a similar way to layer 2 solutions in that they are separate yet connected instances of a blockchain. However, unlike L2s, subnets are designed to be fully interoperable whilst still giving the developers that deploy them an unprecedented amount of control over the parameters of the chain, including the option to run their own virtual machine, set their own validator rules and fee structures, and implement their own governance mechanisms.

Through this ability to support a diverse range of blockchains, each with its own unique parameters and specifications, Avalanche’s subnets work to put an end to the kind of disputes as seen in the Blocksize Wars. To place that debate in the context of Avalanche, the two feuding sides would be able to simply run different subnets that had differing block sizes, without the need to fork. In this way, Avalanche’s subnets are an exemplar of horizontal scaling, which takes the ingenious step to scale by multiplying the number of blockchains, rather than fretting over increasing the speed of a single chain.

This means that subnets allow projects to create application-specific blockchains for their projects. For example, Game-Fi projects can fully customize their networks to suit their specific needs.

This is also huge for projects that have to maintain regulatory compliance, as they will be able to manage their compliance by placing conditions on their membership. This allows projects to comply with a host of potential regulations, such as stipulating the geographical location of a validator, requiring them to pass KYC and AML checks, and ensuring that they have correct licenses.

Crucially, this can all go on independently within a subnet, without impacting any other subnet in the ecosystem. This independence brings huge security benefits with it, as each subnet security can depend less on the security of other subnets in the network. That’s why, in parallel with an Avalanche smart-contract audit, Avalanche offers developers one of the most secure architectures to build their project.

The solutions offered by innovative new technologies such as subnets require a security partner that is able to adapt to and secure the new frontiers created by growth. That’s why CertiK’s Avalanche smart-contract audit is increasingly the first choice for developers launching their Avalanche project.

Having secured over 65 of some of the most exciting projects in the Avalanche ecosystem, CertiK has honed its Avalanche smart-contract audit and tailored it to the specific capacities, needs, and vulnerabilities that its novel architecture entails.

Working alongside our Avalanche smart-contract audit, CertiK has also developed a growing range of state-of-the-art security tools and practices designed to help your project achieve its full potential. From game-changing blockchain analytics tools such as Skynet and SkyTrace which give project teams unparalleled insight into their on-chain activity, to our CertiK KYC verification for project teams, which helps build relationships of trust and accountability between a project and its community. We have also recently introduced a Bug Bounty service which enlists white-hat hackers to continue to seek out novel attack vectors. Whilst an Avalanche smart-contract audit serves as the foundation for this security, it works in tandem with the other products to create the best security posture available. 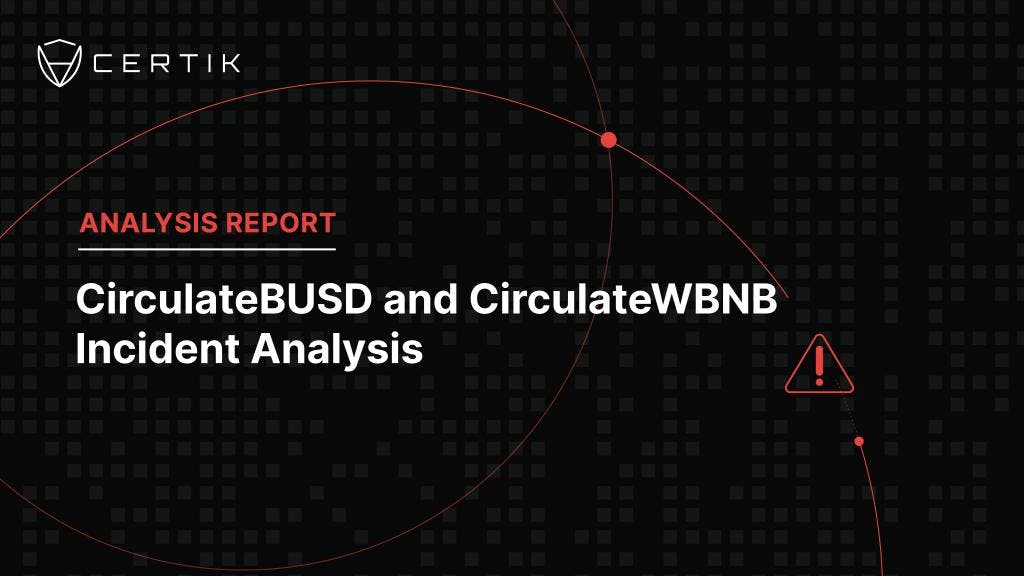 Analysis Reports
Mu Coin Incident Analysis
On 10 December, 2022 at 1:21:34 AM UTC, Mu Coin was flash loan attacked for approximately 45 ETH ($57K) on AVAX. The attack took advantage of differences in price between the token in the LP pools and the token price obtained by buying bonds, resulting in a smart contract that is vulnerable to economic arbitrage. Mu coin founder Jon Vaughn acknowledged the attack and is attempting to raise the price back to levels similar before the incident.

Blogs
Realizing Post-Quantum Security with Algorand
The benefits of quantum computers are manifold, offering incredibly faster processing, and even providing solutions to an entirely new class of problems. However, with the newly tapped power that quantum computers provide comes an entirely new class of security risk that could trample over existing non-quantum security protocols. This blog post will provide a rundown of how quantum computing can threaten web3, and the steps Algorand has taken to protect it.
© 2023 by CertiK. All Rights Reserved.
Products & Technology
Smart Contract AuditSkynetKYCPenetration TestingBug BountySkyTraceFormal Verification
Company
AboutBlogCareersDisclaimerPrivacy PolicyCookie PolicyTerms and Conditions
Social Media
CertiKSecurity LeaderboardCertiK AlertTelegramYoutube
MediumLinkedIn
Wechat
Discord
MediumLinkedIn
Wechat
Discord
© 2023 by CertiK. All Rights Reserved.