On 09 October 2022 JUMPN aka Jump Satoshi, withdrew $1.1 million from their JST token by which point all the projects socials, including their website had been taken down. Two days later, all contracts associated with Jump Satoshi were drained of assets in an exit scam totalling $3.9m.

JUMPN claimed to be a fitness focussed Web3 project that allowed investors to earn whilst they moved. The project had a total of four tokens, all of which had been drained of investor assets. All social media presence has disappeared as well as the removal of the website. Jump Satoshi was highly likely a scam from the onset.

The flow for withdrawing tokens on all four contracts followed a similar pattern. For example, the EOAs identified as the “rugpull” wallets are initially funded by 0x80Ca. For example, the JAC rugpull wallet receives 1 BNB on 18 April 2022.

This wallet also initially funds the JET, JAC and JUT contract creators on the 18 April 2022. Interestingly, the time difference between funding the contract creators and the malicious wallets is extremely small. For example, the JET dumping wallet was funded 3 minutes after the deployer from 0x80Ca. Below we can see a further breakdown.

Additionally, the JST dumping addresses were funded by 0x80Ca on 18th April at 8:59:54 UTC which is just ~14 minutes before the JET Deployer was funded. From this, we can infer connections between the contract creating wallets and the rug pulling wallets demonstrating a pre-mediation from the beginning of the project.

There were plenty of warning signs around the project that led us to alert our community on two separate occasions. On 25th May 2022, we tweeted that JST is showing signs of being a honey pot with many users complaining that they are unable to sell their tokens. 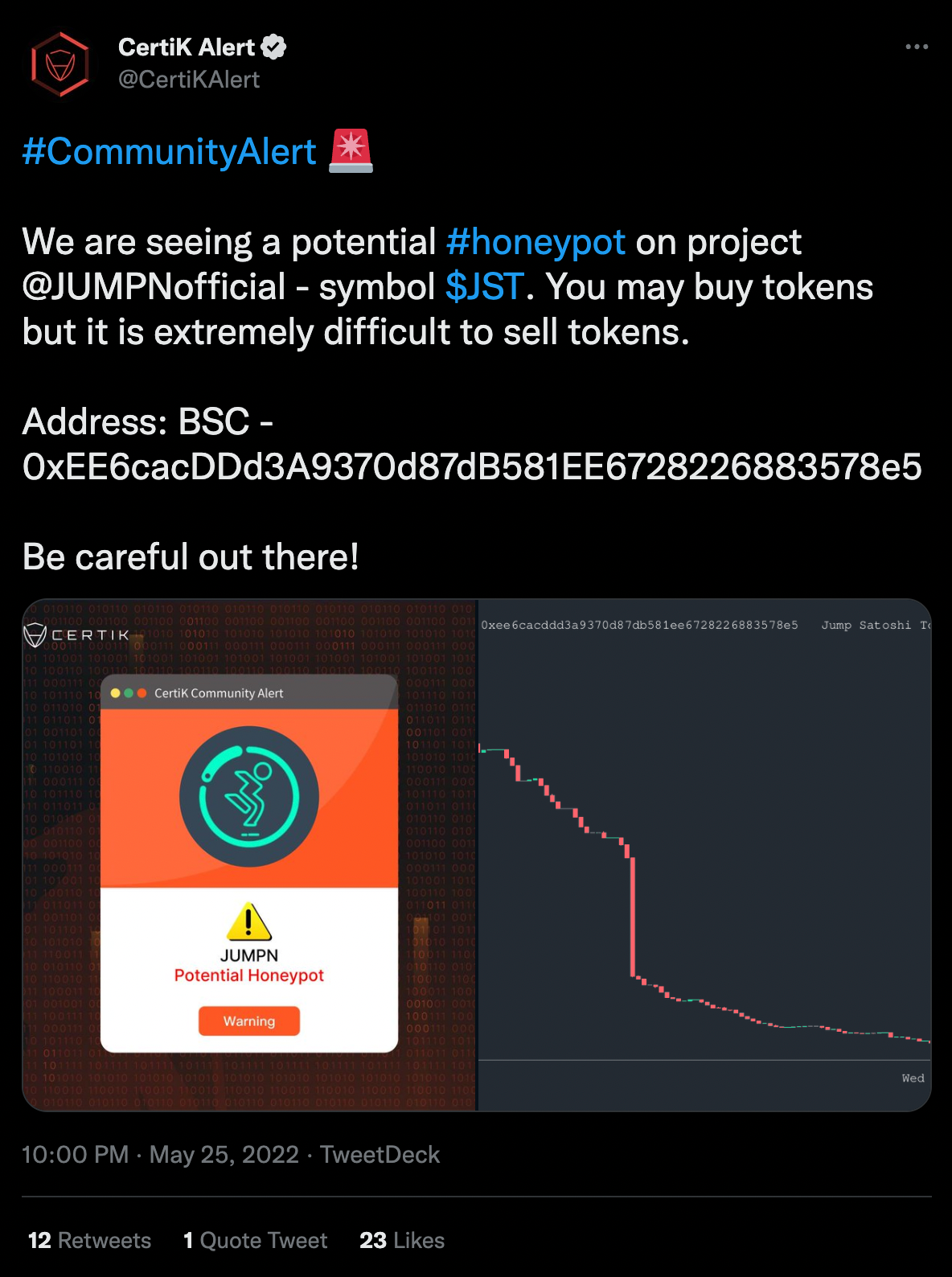 The Jump Energy Token was drained of liquidity on the 10 October 2022 by 0x5c377. The incident began by the malicious wallet creating an unverified contract. 0x5c377 then calls 0x53676fe3 function which withdraws JET tokens and swaps for WBNB. 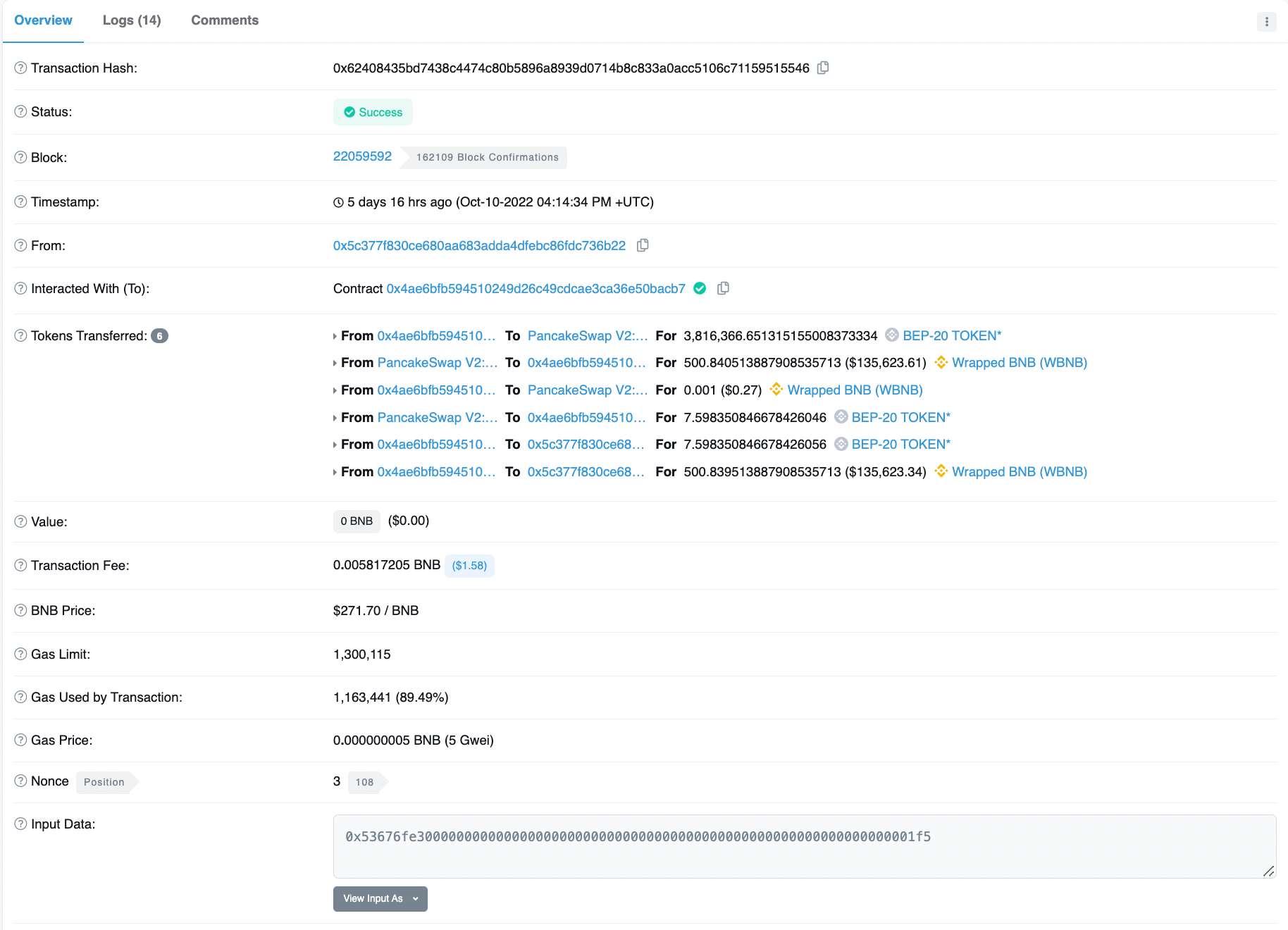 This function is called twice before 0x5c377 withdraws ~573.83 WBNB from the malicious contract created. 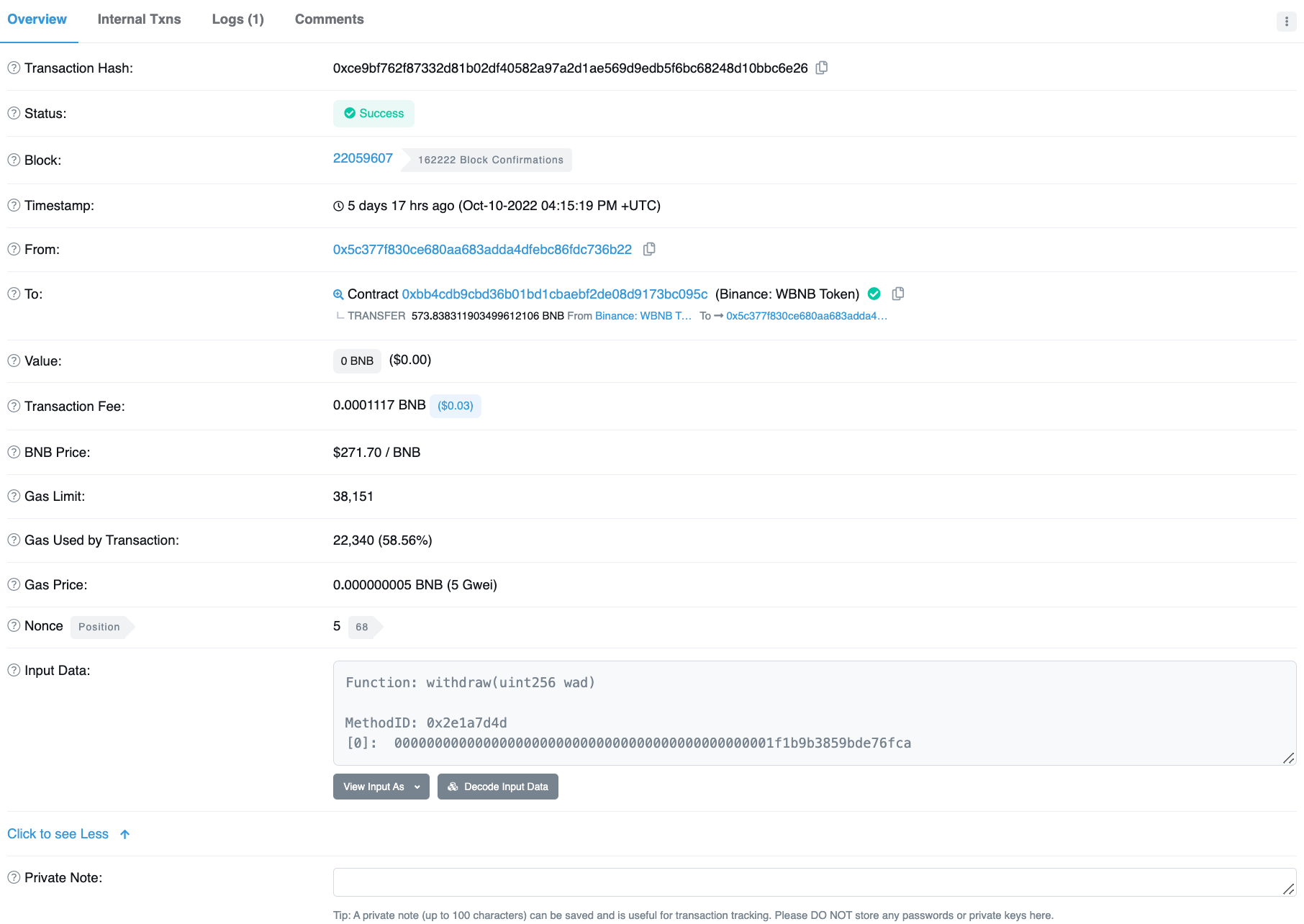 On the 31st October, the stolen funds were deposited into Tornado Cash.

The JUMPN Activation Code token was also drained of funds on 10 October 2022 using the exact same method as the example above. EOA 0xAF7b9 creates a contract and calls 0x53676fe3 function to withdraw funds from JAC contract. This function is called three times and swaps JAC tokens for WBNB and 0xAF7b9 withdraws ~1,278.05 WNB from the contract they created. The WBNB is then swapped for BNB and deposits 1,200 BNB into Tornado Cash. 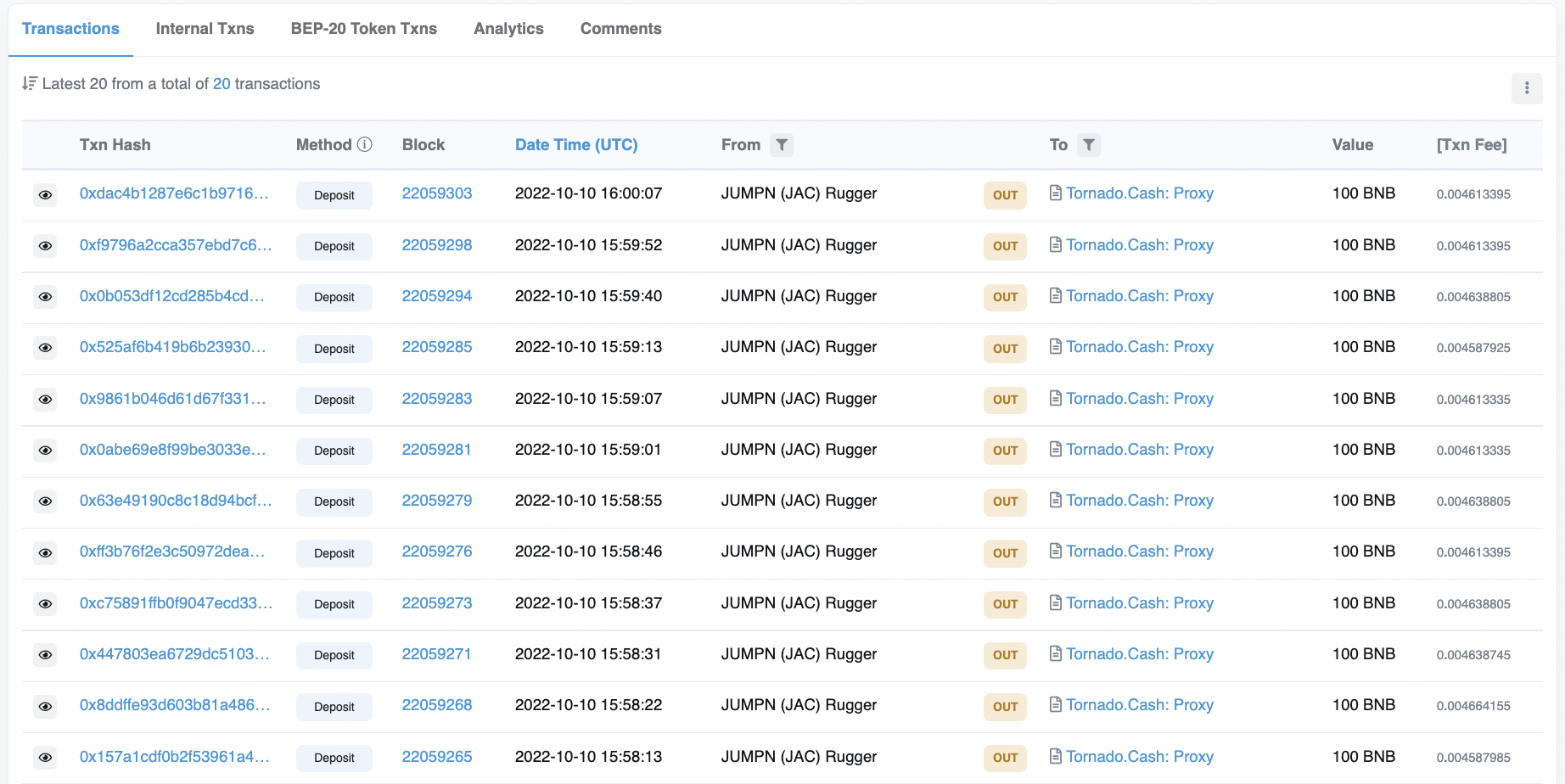 The JUMPN Unstake Token again was drained of assets in the same way as the above two tokens on 10 October 2022. EOA 0x8d41 created a contract and called Sq function seven times, which swapped JUT for WBNB. EOA 0x8d41 then withdraws WBNB which is swapped for 350.51 BNB, of which 300 BNB is deposited into Tornado Cash. 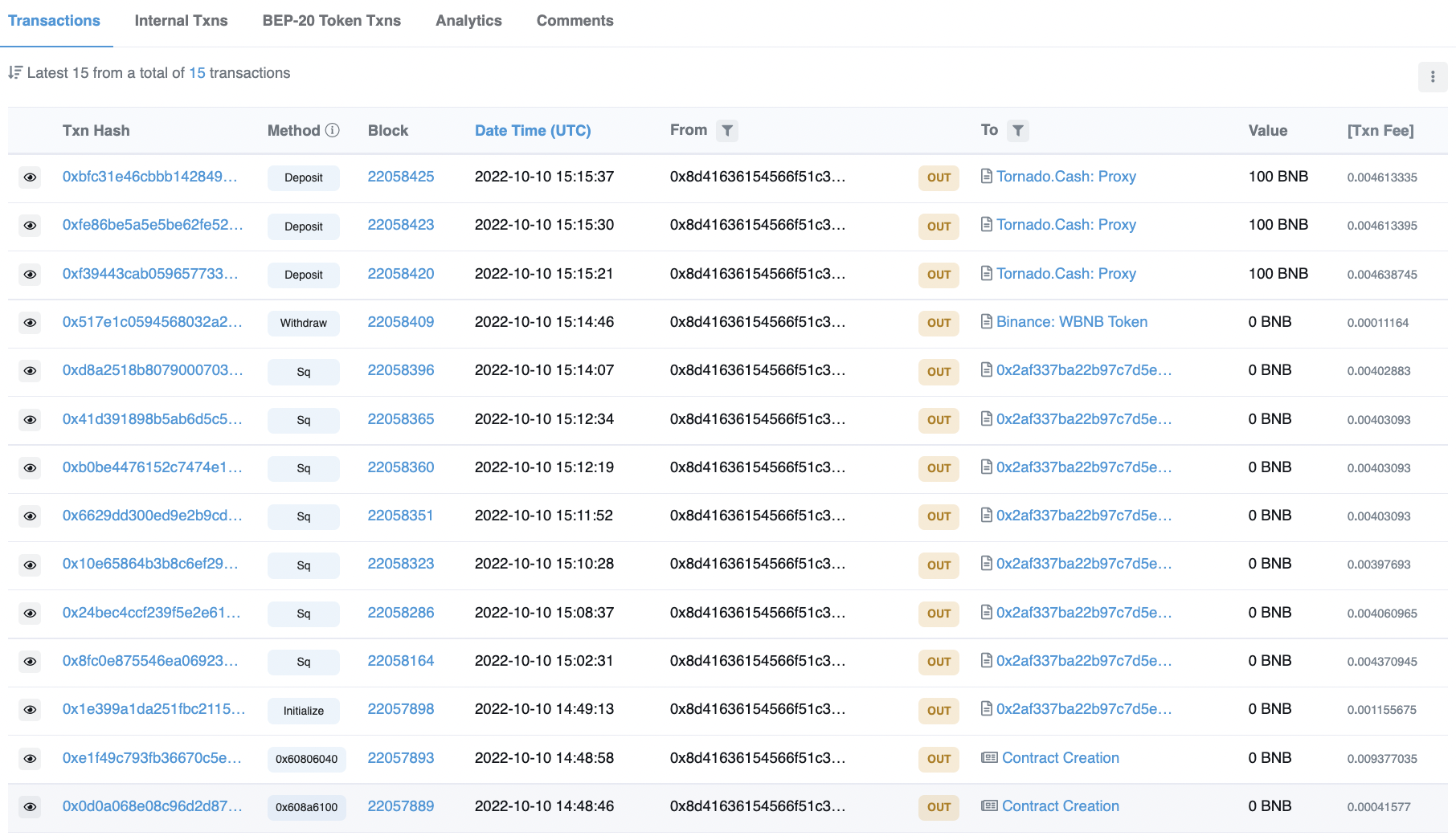 The JST token resulted in the highest losses for investors. The first malicious transactions took place on 31 August 2022 when 0x11137D swapped JST tokens for 1,109 BNB. The wallet then deposited 100 BNB into Tornado Cash and transferred 1,001 BNB to 0x2F29. From there, 1,000 BNB was deposited into Tornado Cash. 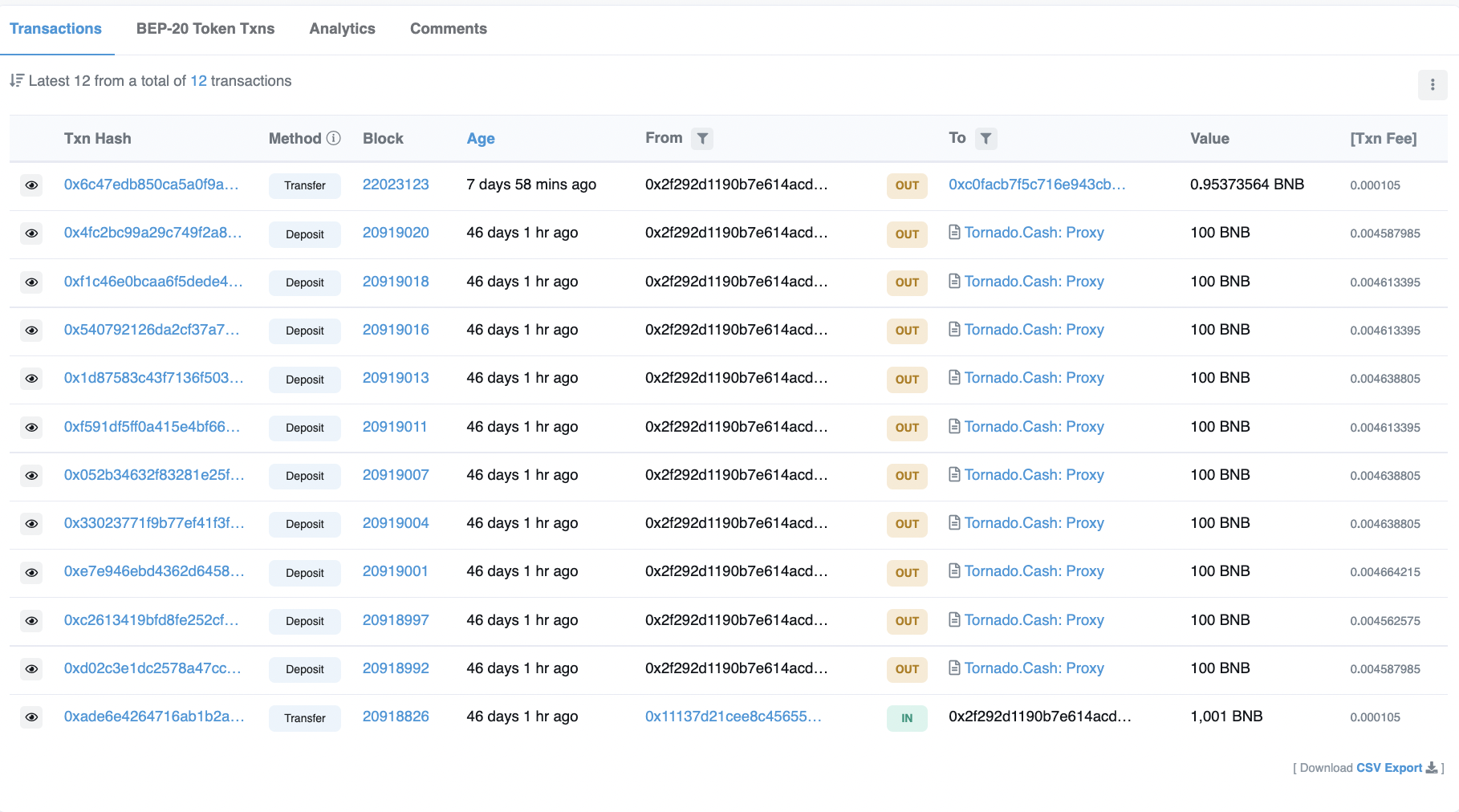 Since attention has been focused on the FTX collapse, the individuals behind this exit scam have become active again. For example, 0x4693f known as (JST Rugger 2) created two unverified contracts on the 8th of November to extract what value remains in the JumpN contracts.

In fact, multiple wallets involved in the exit scam have consolidated a further ~12.37 BNB in 0x2E52fD worth ~$4k at the time of transfer. These funds were then transferred to 0x63530. 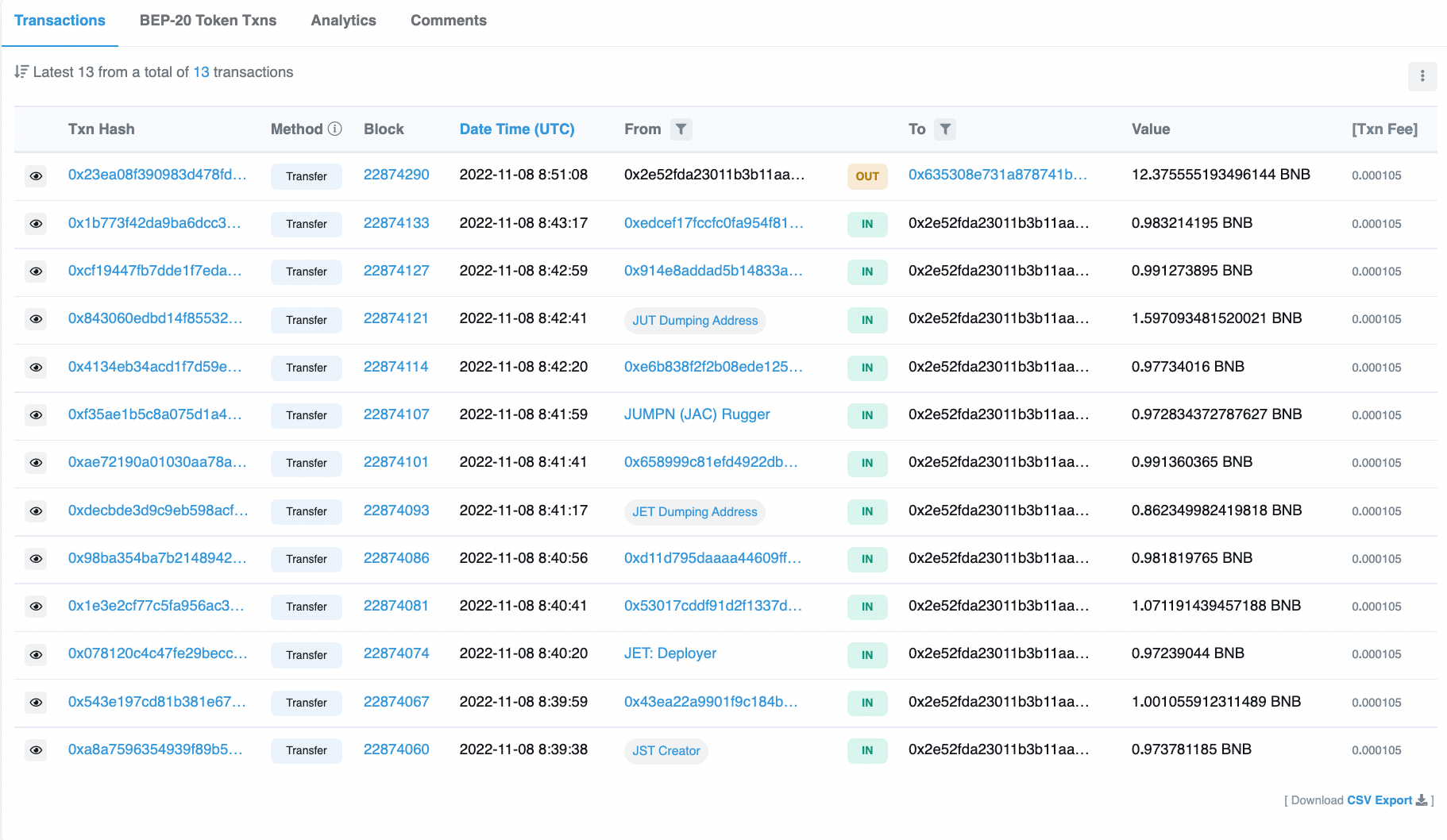 Unfortunately, Jump Satoshi was almost certainly designed to be an exit scam from the beginning. This incident comes in as the 8th largest exit scam observed this year. However, there were warning signs that go back to May where we alerted the CertiK community on the possibility that JumpN was a honeypot. Not surprisingly, the contract didn’t have an audit which would’ve helped investors understand some of the critical (and purposely placed) vulnerabilities.

Protect yourself and your assets by following @CertiKAlert on Twitter to stay up to date on all the latest Web3 security news, and visiting certik.com as part of your due diligence.

Analysis Reports
SudoRare Incident Analysis
SudoRare, a self proclaimed NFT AMM, committed an exit scam within 24 hours of deploying their smart contract that resulted in the loss of $852k.